“These positions needed to be told, we often forget what the truth is,” Costa Gavras tells CΝΑ 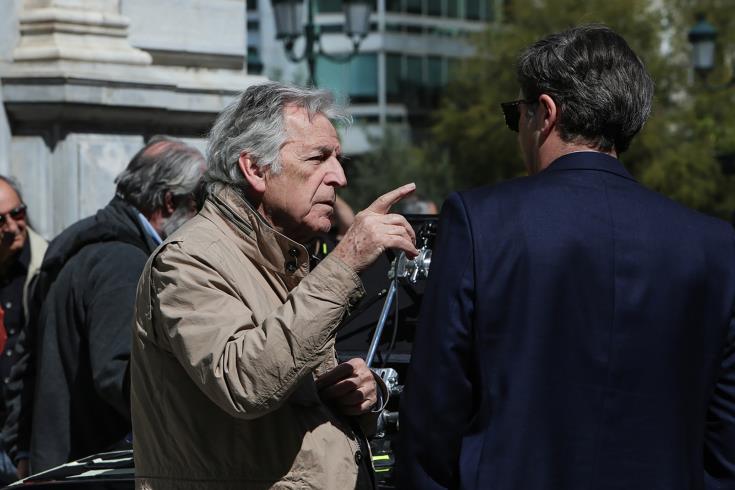 “Adults in the Room” Director Costa Gavras has told Cyprus News Agency in an exclusive interview that the positions conveyed in his movie based on a book by former Greek Minister of Finance Yanis Varoufakis, “needed to be told” adding that “we often forget what the truth is.”

The film, which premiered at the 76th Venice Film Festival and has received conflicting reviews by critics, follows the efforts of Varoufakis as a Minister in the left-wing SYRIZA government over six months in 2015 in a bid to persuade Greece’s lenders to accept amendments in a bail-out agreement offered by Eurogroup to the Greek government.

This is not the first time Gavras deals with political issues in his films. In “Z”, which was based in a book by Vasilis Vasilikos, he depicts Greece before the dictatorship, in “Confession” he recounts the story of a Czechoslovakian minister who undergoes torture under the Stalinist regime, “State of Siege” is about the struggle between the government of Montevideo and the leftist Tupamaro guerrillas.

The Oscar winning “Missing”, follows the true story of an American journalist who disappeared in the aftermath of the Chilean coup of 1973 and in “Betrayed” Gavras tells the story of the hunt for a white supremacist in the American South.

Replying to a question as to how he discovered Varoufakis’ book he explains that he didn’t know him before he assumed his office. “I would read what the newspapers would write. Everyone wrote against him. Until I met him and he made an impression on me. He had written an article in an English magazine, I read it and I found it very interesting,” he says.

“I wanted to meet him. I went to Athens and I met with him and he showed me what he had done as a minister and the notes and recordings he kept,” he adds.

Up until that moment, he notes, I had no character, no main storyline. He explained that in order for a film to be produced it is necessary to have the characters, the place and the time. The place, he said, was Brussels, the time was the six months during which discussions took place at the Eurogroup. “So, he (Varoufakis) started writing his book and when he finished a chapter, he would send it to me,” Gavras adds.

Replying to a question about British Director Ken Loach he confirms that he had also read the same article and that he was also interested in making the film but, adds that Loach told him that it would be best if he (Gavras) undertook the project.

In the movie, he points out, the main interest is what took place during those six months. Which, according to Gavras, “offers elements both about the future but also about the past.”

Gavras poses the question “whose responsibility is it that (Greece’s) debt was allowed to become huge?” replying at the same time: “Both the Right’s and the Left’s”.

Off course, he continued, “Europe let it be, encouraging it (to grow). Because they sold and made money. Until it became so huge that they got scared. Particularly after the disaster in America, in 2008 with Lehman (Brothers).”

“Here in France we also have debt. But it seems that Greece has more poor people…,” he adds.

Replying to a comment that Greece became a lab-rat with the austerity that was imposed, Gavras agrees.

“Yes, and we have paid for it and we are continuing to pay for it,” he says, adding that “five hundred thousand young men and women have immigrated. It is no small number in a population of 11 million.” Just like his own generation after the civil war, he notes.

Asked whether the scenario is an accurate adaptation of the book or whether significant changes were made he replies that he made some changes in order for the film to have a rhythm.

He adds that he also made some changes which do not correspond to reality but act as metaphors such as the ending of the film, or a scene where Varoufakis visits the European Central Bank. He continues noting that his changes also have to do with the people. “One cannot leave the people outside. There always needs to be a relationship with the time within which the story unfolds.” This, he explains, “has limitations.” Because, he points out, it was necessary to maintain the truths.

Replying to a question about the suspense of the film in combination to a certain extent with a narrative which resembles a documentary Gavras says that where he had to convey what Yanis Varoufakis supported, “I followed his notes and recordings.” Because, he adds, “many people said and wrote that he did not know what he was talking about or how to deal with them (the Eurogroup)”.

“I read his speeches at the Eurogroup and one can see plainly that he knew exactly what he was talking about and that he was very well prepared. Despite the fact that he was continuously accused by them,” he points out.

Gavras replies positively to a comment that those before Varoufakis would sign bail-out agreements without reacting or seeking to make changes. “Yes. Yanis had the responsibility. That is why he was sent there. And he tried his best. The tragedy is that afterwards Tsipras (Greece’s Prime Minister at the time) accepted everything,” he says. It is also true, but is not something which is said, he continues, that the agreement was then tabled before the Parliament and everyone voted for it. Two months later he (Tsipras) had another election and won again.

“This means that these positions need to be told. We often forget what is the truth,” he underlines.

Asked about a “Plan B” for Greece which he touches upon in the film, Gavras says that Europe was scared that Tsipras would not be able to repay the debt. Particularly so, because they considered him a leftist and there were various tendencies in his party, even anarchists. “Every Tom, Dick and Harry, as we would put it”, he notes.

There were those who said we should follow Europe, others said that we should leave Europe and the euro, others argued that we should ask for a loan from Russia. “This nonsense scared Europeans,” he says.

They did not, he points out, have a great deal of trust in Greek politicians. If one takes into account previous ones (politicians in charge) and the lies they told. “They knew that many people, even ministers, accepted money, one of them, (Akis) Tsochatzopoulos, had gone to prison; He had taken millions for worthless submarines. Europeans knew all of the above. And Tsochatzopoulos was released from prison after five years,” Gavras continues.

Replying to a comment that European politicians have also been involved in scandals, he says “certainly,” adding however that Greece is a small country and “our scandals appear to be greater.”

Asked whether he feels optimistic about Greece in the future Gavras replies that he is not very optimistic.

“We will be paying off the debt for many years. Our children and our children’s children will. Growth is necessary but not to the detriment of the people. Austerity must come to an end, unemployment should be combated, no more cuts. Governments promise much before elections and do little afterwards,” he notes. “It remains to be seen…,” he says.