The 31st Psatharis Auction brings to the market a total of 133 lots, mostly artworks by Greek and Cypriot artists. Rare editions and historic books are also represented. Meriting special attention is an extremely rare loose sheet map of Cyprus Cipro (Venice) from 1570, carrying the name of engraver Nicolo Ne(LLI) at the lower right corner, (Estimate €20.000 – 30.000). Preview of the lots will be held on 6-8 June at the Cleopatra Hotel in Nicosia.

“A series of high-end artworks appearing at auction shows the market is rising during economic uncertainty,” says Founder and Director Nikos Phatharis. “It tells us that more and more collectors see art as reduced risk investment strategy.”

Blue chip name paintings to be offered at the auction include the Abstract (oil on canvas, 54 x 69 cm, Estimate €15.000 – 20.000), by Christoforos Savva (1924 – 1968). The painting belongs to the latest period of the artist (1965 – 1967). The large asymmetrical planes of monochromatic colour imbue the painterly surface with movement. The painting underscores Savva’s fascination with Abstraction.

A unique landscape, Zachlorou (oil on canvas, 60 x 80 cm, Estimate €16.000 – 25.000) by emblematic Greek Painter Yiannis Spyropoulos (1912 – 1990) is another important acquisition and it is expected to impress with its beautiful landscape and fascinating whites and earthly colours. 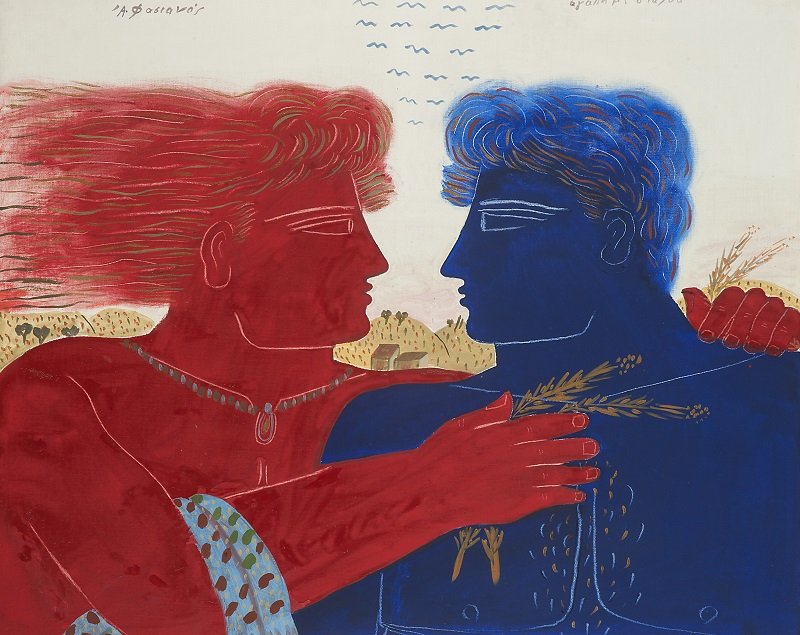 Expected to draw enthusiasm among collectors is also the Table (oil on canvas, 70 x 100 cm, Estimate €6.700 – 9.000) by Theodoros Manolidis with its impressively structured composition and glowing objects.

After five decades in a private collection, a rare Abstract Geometric (acrylic on canvas, 86 x 120 cm, Estimate €3.200 – 5.000) by Modernist Katy Stefanides is returning to the market.  The painting was exhibited at the artist’s first solo show, which was held in 1972 at the Acropolis Gallery in Nicosia. The exhibition was inaugurated by Theodotos Kanthos. In his opening speech, Kanthos had said that the paintings ought to be likened to “platonic music.”

So-called first generation Cypriot artist, Ioannis Kissonergis (1889 – 1963) is richly represented at the Auction with three works, among which Untitled (oil on canvas, 44 x 29, 5 cm, Estimate €6.000 – 9.000) fascinates with its masterful dialogue between the central figure and the backdrop. Another highlight among Kissonergis’ paintings is the reverse-side water colour Kyrenia and Beggar (25 x 34 cm, Estimate €8.000 – 12.000). 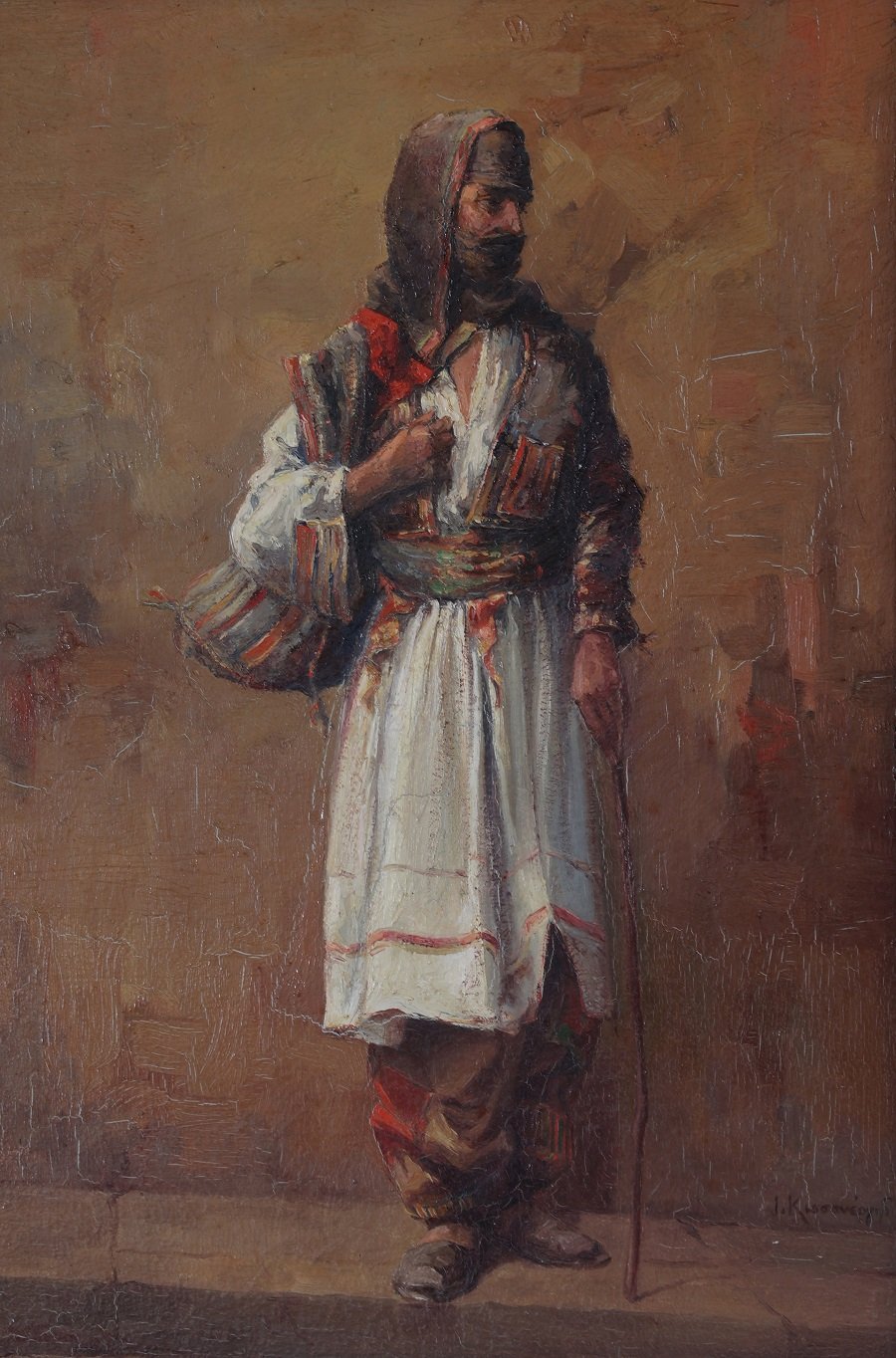 Auction highlights include Amiantos (€8.000 – 12.000) by Nicos Nicolaides (1884 – 1956) with its striking whites and beautiful melancholy, and Figure (€5.000 – 8.000) by Andreas Charalambides (b 1939) with a renaissance like central figure alluding to the Botticelli’s nymphs. Both painters are well represented at the Psatharis 31st auction. 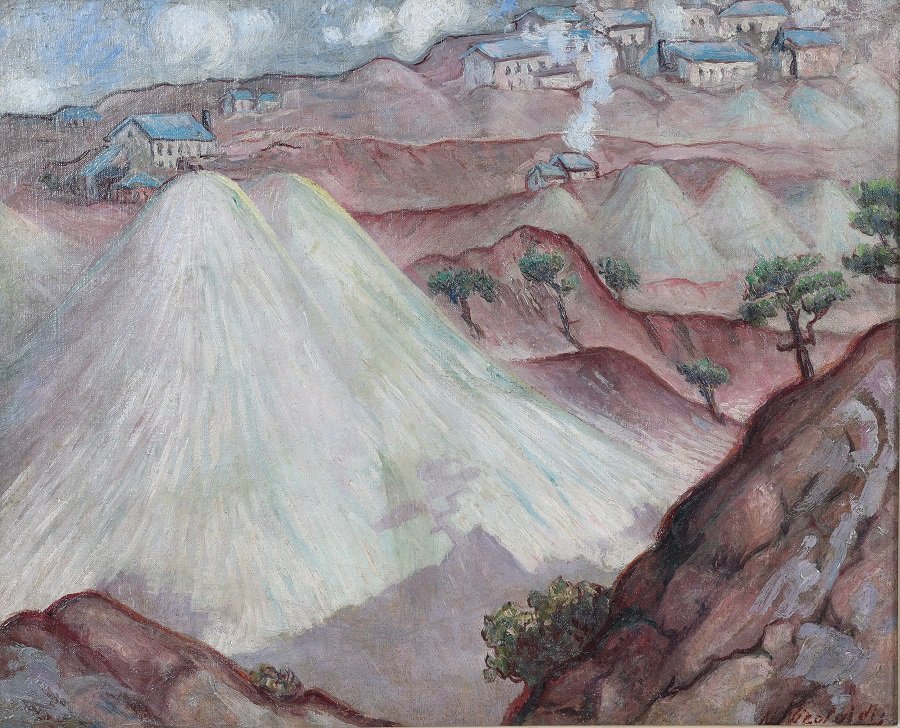 The Card Players (€4.700 – 7.000) by Pavlos Samios (1948 – 2021) carries influences from Cezanne’s painting of the same name. Samios, however, makes his images blunt with an almost brutal force as he sets them within a peculiar almost chaotic atmosphere. 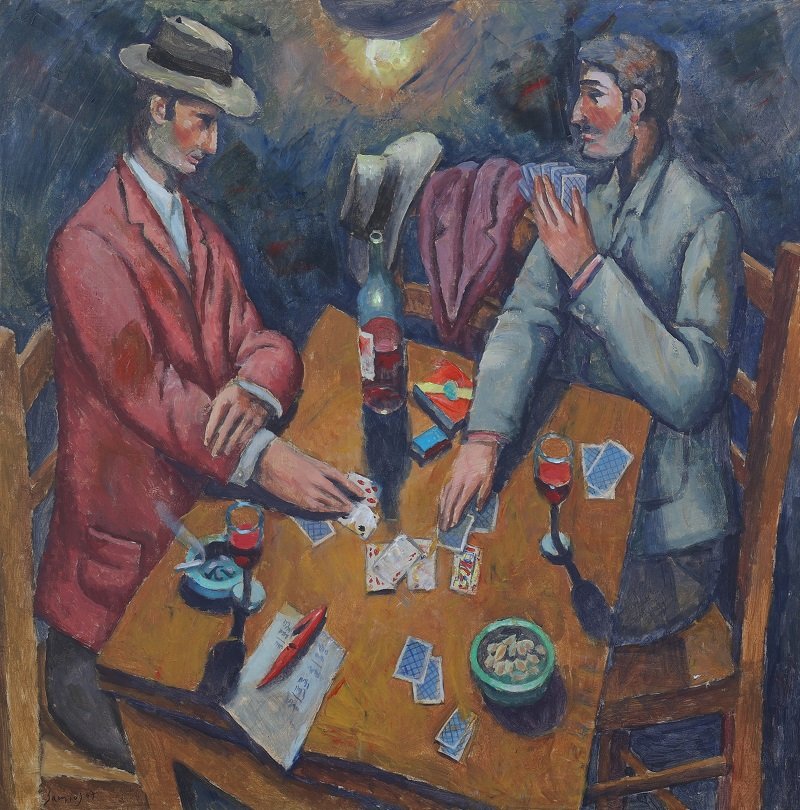 Untitled (€5.000 – 7.000) by the great Pavlos Dionysopoulos which captivates the viewer with its cosmic explosion also rates high among investment opportunities.

Investors have the option of choosing to have a physical presence at the auction, which will be held on the evening of the 8th of June, at the Cleopatra Hotel in Nicosia. The auction will also be live streamed through the international digital platform www.invaluable.com offering thus the opportunity to collectors worldwide to place digital bids. The option of telephone and written bids is also available. A preview of the lots will be held on 6-8 June, at the Cleopatra Hotel in Nicosia.

By george
Previous article
22-year-old wanted for various crimes; have you seen him?
Next article
Mother of National Guard officer who died in accident still waiting for answers