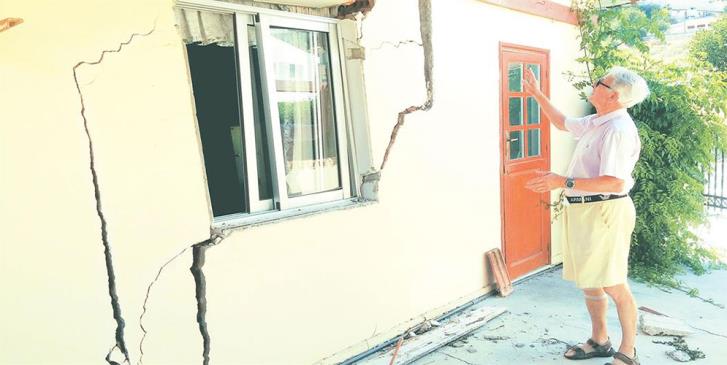 The Technical Chamber on Friday urged the state to support the Pissouri residents whose homes have sustained enormous damage because of a slow-moving landslide.

In a written statement it said that it shared the anguish of affected residents. It added that parts of this landslide is reactivated at times, causing more damage to the homes and to public infrastructure.

The issue has caught the attention of the BBC which on Monday highlighted the plight of British families whose homes have been ripped apart.

BBC One’s Inside Out South programme interviewed couples who said they had been abandoned by the government. It noted that similar to the UK, insurers in Cyprus do not cover landslides and it is the government which is responsible for compensating for natural disaster.

Their lawyer Elina Zoi told Radio Active that the state is dragging its feet, refusing to pay compensation.

The Technical Chamber said that after it was informed of the situation in 2015 it had sought and obtained information from the Interior Ministry as to what was to blame for the problem.

It said the subsidence followed the ground being covered up by loose and unsuitable material in an effort to deal with the landslide.

The state has an obligation to give the necessary answers to the question how such a problematic area from a geological point of view had been included in a housing zone, ETEK said.

It urged its members to be careful and adhere to the law, taking into consideration the actual geological situation.

“Given that the affected residents have the least if no responsibility for the problems they face, the Technical Chamber urges the state the soonest possible (since the problems arose in 2011-2012) to take the necessary actions to rehouse the affected families, suspend the issue of development permits in the area and to proceed with the necessary specialised studies that will come up with solutions to the problem,” it said.