Swearing-in ceremony of new President of the Supreme Court 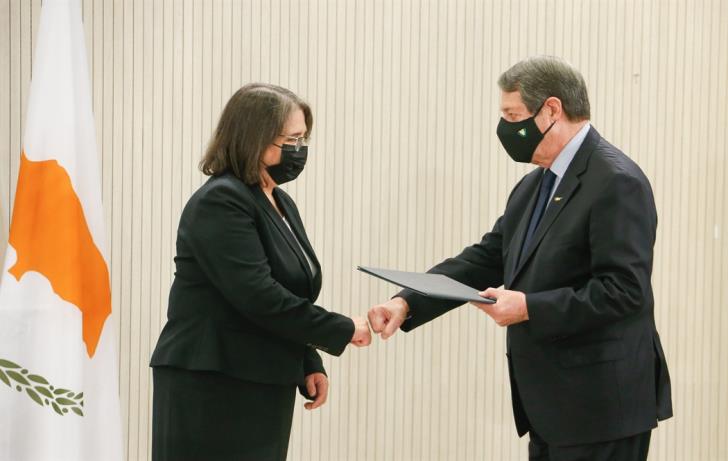 Cyprus President Nicos Anastasiades has expressed his political will and determination, as well as that of the Government, to take further measures to punish those involved in corruption, but also to strengthen transparency, accountability and the rule of law.

Speaking on Tuesday during the swearing in ceremony of the new President of the Supreme Court Persephone Panagi, who is the first female to be appointed to this position since the Republic of Cyprus was established, the President stressed the commitment to the fight against corruption.

He said that in order to effectively manage the phenomenon, in addition to the bills adopted or those submitted to the Parliament, the Government is focusing its efforts on additional actions which hopefully will be announced next week.

The President also expressed the Government`s determination for a radical modernisation of the justice system, referring to what has been achieved since 2013, among others, the  modernisation of the structures and the operation of the Courts, the digitalisation of courts and the promotion of e-Justice, the establishment of new Courts Referring etc.

He referred to the new Supreme Court President saying that her appointment was based on her academic studies and her excellent legal and scientific adequacy, her experience and the integrity of her character.

President Anastasiades also thanked the former President of the Supreme Stelios Nathaniel for his service and his contribution to the modernization of the justice system in Cyprus.

On her part, Panagi said that the priority of the Supreme Court, especially at this time, is the reform of the judicial system, in order to modernise it and step up the efforts for the delivery of justice.

She said that the implementation of the reform projects, necessary for the effective response of our courts to their mission, can be achieved only with the help and cooperation of the other two state powers, the executive and the legislative.