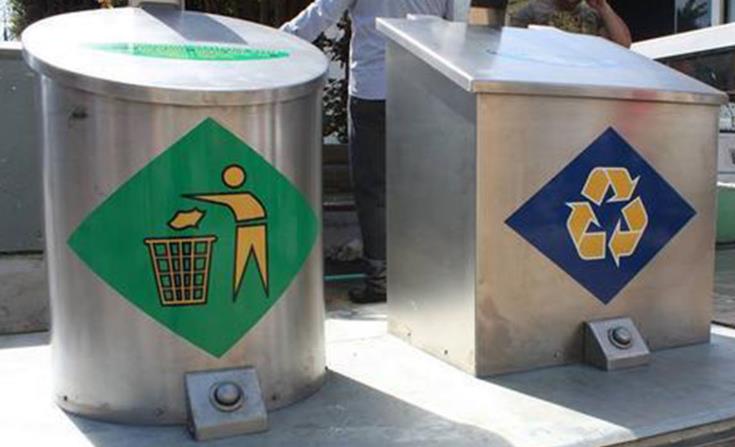 A total of 68 submerged bins for recycling materials are expected to operate in Larnaca’s seaside area for producers of large amounts of waste.

In statements to CNA, Larnaca Mayor Andreas Vyras said that “we paid particular attention to completing this specific project soon.” Already personnel is in training and the goal is for the new bins to become operational from February 1 onward, he added.

He explained that the key goal is “recycling close to units where the greatest quantities of waste can be found such as hotels, restaurants and recreational centres.” Another aim, he said is “to resolve the problem of visual pollution and bad smell which would be present especially during the summer months, in the coastal area of Larnaca and the Mackenzie area, something which constituted a nuisance for both visitors and residents.”

Vyras noted that through the project “the quantities of recyclable materials collected from restaurants, recreation seaside centres and hotels through collecting solid waste at the source will increase.”

The programme will run for five years, he said, adding that “we will correct any problems that may arise and we will try to find more funds in order to extend it to other areas of the city facing problems of a similar nature.”

Replying to a question, Larnaca’s Mayor pointed out that a total of 68 bins will be placed in 17 spots of Larnaca’s coastal front and in particular the areas of Mackenzie, Tasos Mitsopoulos Avenue, Foinikoudes and another four spots in the city centre.

“We belived that it is the best way to achieve great recycling quantities, but also to correct the visual pollution, bad smell and additional problems created,” he said.

Referring to the project’s funding, Vyraas said that it is funded by the Environment Department in the context of a programme for the reduction of solid waste of hotel units and relevant mass production of waste units in Larnaca and Famagusta Districts, which is co-funded by the EU’s Cohesion Fund.

He also said that its goal is to “promote the separate collection and sensible management of solid municipal waste in coastal areas.”

The project is available for local authorities which have hotel units in their coastal front, aiming to establish the separate collection of recyclable waste such as paper / carton, metal, plastics, glass and even organic waste from hotels, tourist resorts, restaurants and recreational centres, he added.