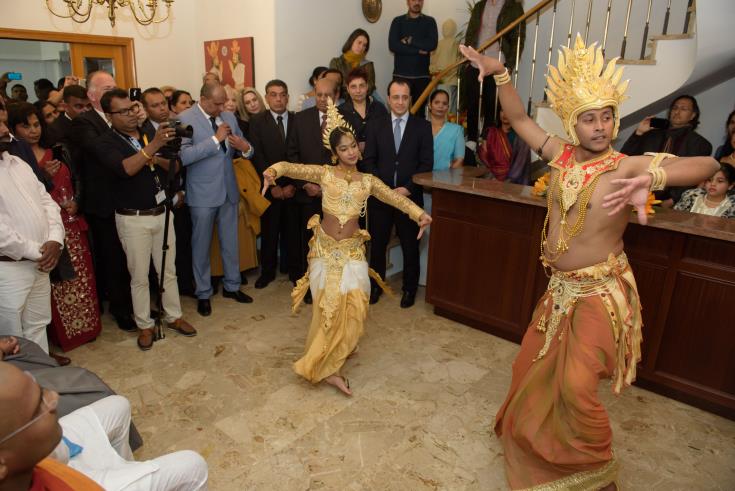 Foreign Minister Nicos Christodoulides and his Sri Lankan counterpart Tilak Janaka Marapana said on Thursday that the two countries were opening a new chapter in their bilateral cooperation, while inaugurating Sri Lanka’s Consulate Office in Nicosia.

Speaking during the opening ceremony, Marapana also reiterated his country’s support to the unity and territorial integrity of Cyprus, for which Christodoulides expressed appreciation. The Cypriot Foreign Minister cited commerce, tourism, investment and education among the areas which were identified during a bilateral meeting with his Sri Lankan counterpart, on Wednesday, and where Nicosia and Colombo hope to advance their cooperation.

“Today we are adding another important channel of cooperation to the ties that bind us, one which we are confident will provide further impetus to strengthening our relations” said Christodoulides.

He added that despite the 5,680 km that separate the two island-states “we share many of the same ideas and principles that have guided our close cooperation in many international organisations and fora, like the UN and the Commonwealth.”

The two countries, he went on, also share a common vision for a better future that has been shaped by their political and economic links. “Following the establishment of diplomatic relations between the two countries in 1963, our relations have grown steadfastly” he added.

“However, as we agreed with the Minister yesterday, we have not fully realised the potential of our cooperation in areas such as trade, commerce, tourism, investment and education which now with your physical presence in Cyprus we hope to advance” he added.

The Foreign Minister said that they are committed to enhancing bilateral relations in all areas for the mutual benefit of Cypriot and Sri Lankan people. Talking about people-to-people contacts, Christodoulides said the presence of a growing Sri Lankan community and migrant workforce in Cyprus has been instrumental in reinforcing the strong bond between the two countries.

Finally, he expressed Cyprus’ appreciation “for Sri Lanka’s position on the Cyprus issue and its support to our efforts to end Turkish occupation and reunify our island to a viable and comprehensive settlement.”

“Sri Lanka has consistently supported the unity and territorial integrity of your country, Cyprus,” said on his part the Minister of Foreign Affairs of Sri Lanka, Tilak Marapana.

Marapana, who also met with President Nicos Anastasiades, said that the two countries share many things in common, citing among others the fact that both countries are island-states, with separatist movements in their territories.

“As members of the Commonwealth and the United Nations we will enhance our partnership to pursue shared interests and address common challenges” he added.

He said moreover that with the opening of the Consular Office in Cyprus “we are also opening a new chapter in our longstanding bilateral relations which we established 56 years ago, in 1963.”

Marapana said moreover that he had an excellent meeting with Christodoulides on Wednesday, where the two men identified new areas of cooperation and agreed to further broaden the scope of bilateral engagement.

The Minister reaffirmed finally Sri Lanka’s commitment to further enhance the ties of friendship and cooperation between the two countries.

At the beginning of the ceremony, Sri Lanka’s flag was raised outside the consular premises and the national anthems of the two countries were played. The Foreign Ministers also unveiled the Consulate’s plaque and lit a traditional candelabra. A Sri Lankan couple in traditional attire presented folk dances before guests.

The ceremony was also attended by Daya Srikantha John Pelpola, the Ambassador of Sri Lanka to Cyprus, resident in Rome, who thanked previous Honorary Consuls for their services and expressed confidence that bilateral relations will be enhanced further.

Dhammika Semasinghe, Director General for Europe and Central Asia at Sri Lanka’s Foreign Ministry and Rohana Ambagolla, the Consul General of Sri Lanka in Cyprus also attended the ceremony, along with Sri Lankans who work in Cyprus, foreign Ambassadors and other guests.