Spehar urges both sides to continue engaging with UN, says it is “critical” for Cyprus talks 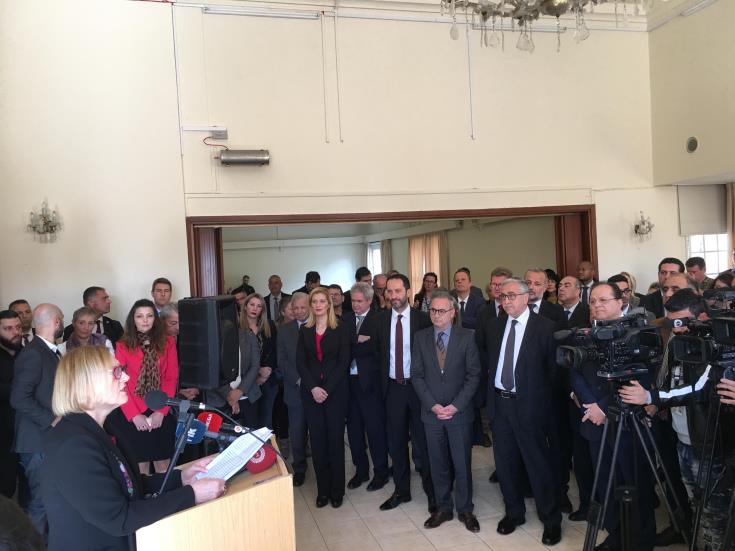 The two sides in Cyprus should continue to engage with UN envoy Jane Holl Lute, recognizing that the outcome will be critical in determining the future of the Cyprus talks, the UN Secretary-General’s Special Representative Elizabeth Spehar said today.

Addressing a bicommunal reception in Ledra Palace, in the Nicosia buffer zone, organized by the Slovak Embassy in Cyprus, Spehar also noted that the uncertainty of the current situation should not overshadow the prospects for, nor the gains of a united future. “Let us remember that the night is darkest just before the dawn” she said.

Referring to Tuesday’s meeting between President of Cyprus Nicos Anastasiades and Turkish Cypriot leader Mustafa Akinci and their agreement on Confidence Building Measures (CBMs), the UNFICYP Head of Mission said that “this is encouraging, but of course there is still a significant road to travel to return to the negotiating table.”

According to Spehar “CBMs are no substitute for negotiations, but after years of estrangement between the communities, they can help to build the foundation for greater public investment in the process and for both a successful and a sustainable outcome.”

Referring to the regular meetings of Greek Cypriot and Turkish Cypriot political party leaders and representatives, that take place in Ledra Palace for three decades under the auspices of the Slovak Embassy, Spehar said that the political track is a prime example of how engagement can thrive, even in challenging circumstances.

Moreover, she called on political parties to support the leaders in their quest to finalize the terms of reference and get back to the negotiating table. “The leaders have pledged to do their utmost, to work to solve the Cyprus problem. You can encourage them and support them to be true to that pledge” she added.

Referring to the leaders’ meeting on Tuesday, in the UN protected area, the UN official said that this was the first encounter between President Anastasiades and Mustafa Akinci this year and only the third meeting between them since the closing of the Conference on Cyprus, in July 2017.

“The meeting took place in a frank and open manner and with a cordial spirit” she said. According to Spehar, in addition to further clarifying each other’s positions on key matters and identifying outstanding issues to be resolved, the leaders also agreed to implement several important CBMs for the benefit of the two communities. “This is encouraging but of course there is still a significant road to travel to return to the negotiating table” she added.

The UN Special Representative also noted that the informal leaders’ meeting took place as the consultations with the parties to the Cyprus issue, initiated by Jane Holl Lute in July 2018 on behalf of the Secretary-General, continue.

She added that Lute conducted her third visit to Cyprus between February 2-4, meeting with the two leaders and has also continued to engaged with the guarantor powers, with the aim of supporting the parties to agree on the terms of reference that would constitute a consensus starting point for meaningful, results-oriented negotiations.

“The importance of this exercise should not be underestimated and the parties should continue to engage with Ms Lute in a constructive, creative and diligent manner, recognizing that the outcome will be critical in determining the future of the Cyprus talks” Spehar said.

Addressing political party representatives, Spehar said that they may have different opinions on how to move forward, she expressed however certainty that they do have “the means to work towards a better, united Cyprus.”

She said moreover that the recent Security Council resolution on Cyprus outlines several areas, such as Confidence and Trust Building Measures, including some of the ones agreed by the leaders on Tuesday. Other measures, such as peace education and bringing children together from across the divide, deserve encouragement, she said.

Many ideas for confidence building require mere political will, which is always given a boost when the political class and the general public call out their support, she added.

Spehar also cited recent public opinion surveys conducted across Cyprus regarding the climate for the peace process, saying that they show among others that although expectations for a successful process are low, a majority in both communities still do wish for negotiations to resume and for them to be more inclusive and more transparent.

She said that the Secretary-General and the Security Council have emphasized the imperative of informing the public and engaging civil society, especially women and youth, with the potential to generate better conditions of success.

Greater involvement of civil society, particularly women and youth is proven to greatly improve the chances of success and sustainability of political processes, she noted.

As for the meetings of Greek Cypriot and Turkish Cypriot political parties, Spehar said that UN Secretary-General Guterres mentioned the political track in several of his recent reports on Cyprus, and thanked the Slovak Embassy in Cyprus and the government of the Republic of Slovakia for this “unmatched initiative.”

In his address, Slovak Ambassador Jan Skoda said that 2019 is a special year, commemorating 30 years of this diplomatic initiative that started by the Ambassador of Czechoslovakia at that time, Emil Keblusek.

“Thirty years ago Ambassador Keblusek came with the idea to gather politicians from the Greek Cypriot and Turkish Cypriot communities around one table, in order to find a way to better understand each other and keep discussing topics that could bring them close together in the quest to create conditions for the settlement of the Cyprus issue” he noted.

The most beautiful gift for this anniversary to all of us and to the memory of Ambassador Keblusek would be the resumption of negotiations and the settlement of the Cyprus issue, Skoda went on. “Unfortunately, this is not the case although encouraging steps have been made and taken by both leaders recently” he added.

Skoda said however that he was proud that in spite of difficult political circumstances “we succeeded to keep this channel of dialogue and communication” open, a fact also appreciated by the Secretary-General in his last report on UNFICYP.

The Ambassador thanked finally Greek Cypriot and Turkish Cypriot political party leaders and representatives for their active and constructive participation, noting that since January 2018, a total of 8 meetings has taken place.

Turkish Cypriot leader Mustafa Akinci and the Greek Cypriot negotiator Andreas Mavroyiannis were among those who attended the bicommunal event at Ledra Palace. The two men, together with Spehar also had a brief conversation. Members of the diplomatic community, representatives of the religious leaders, former Foreign Ministers, representatives of Technical Committees and NGOs, as well as senior UNFICYP officials were also present.

By In Cyprus
Previous articleBaby ‘sale’ case goes to court
Next articleCohen accuses Trump over WikiLeaks, calls him ‘racist’ and ‘conman’