Spehar to hold separate meetings with Cyprus leaders on Thursday 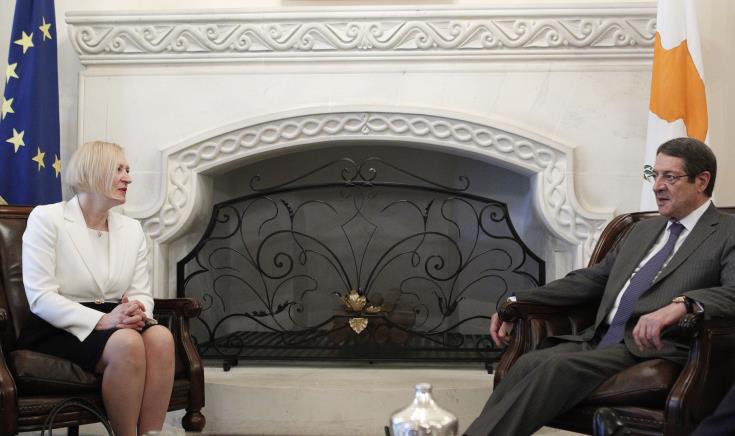 UN Secretary General’s Special Representative in Cyprus and head of the UN peacekeeping force on the island (UNFICYP), Elizabeth Spehar, will hold on Thursday, January 9, separate meetings with Cyprus President Nicos Anastasiades, and Turkish Cypriot leader, Mustafa Akinci, ahead of her visit to New York where she will brief the UN Security Council in the framework of the deliberations for the renewal of UNFICYP’s mandate.

According to the provisional programme of work of the UN Security Council for this month, consultations on UNFICYP will take place on January 20 while the adoption of the UN resolution for the renewal of the peacekeeping force’s mandate has been scheduled for January 30.

The Cyprus News Agency (CNA) has learned that Spehar will meet with Anastasiades on Thursday at 1000 local time (0800 GMT) and with Akinci at 1230. Next week she is scheduled to fly to New York where she will hold meetings in view of the consultations at the UN Security Council for the renewal of UNFICYP’s mandate. CNA has also learned that the UN Secretary General’s report on UNFICYP, that will circulate as an official document of the UNSC, is currently being finalized at the UN seat.

Even though the programme of Spehar’s meetings in New York has not yet been finalized, she is expected to meet with the United Nations Under-Secretary-General for Peace Operations Jean-Pierre Lacroix, the five permanent members as well as the other members of the Security Council, representatives of UNFICYP troop and police-contributing countries, and with the President of the UN Security Council, who is currently the Permanent Representative of Vietnam to the UN.