Spehar agrees that UNFICYP is a stability factor on the island, President says 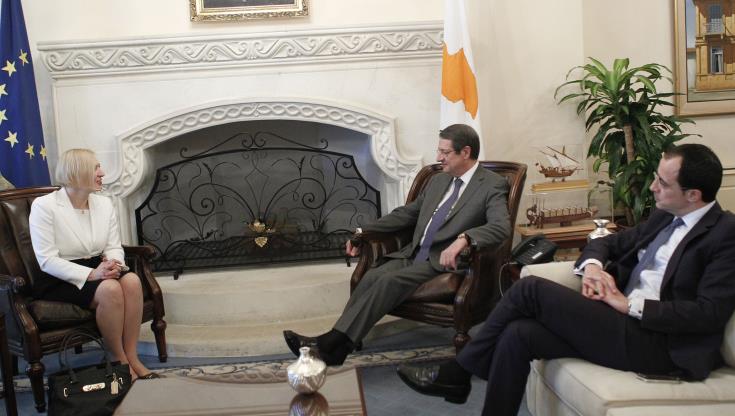 President Nicos Anastasiades said on Friday that his impression during the meeting he had with UN special representative and head of UNFICYP Elizabeth Spehar is that she also adopts the position that the presence of the peacekeeping force in Cyprus is one of the most important factors of stability in the island.

President Anastasiades, who received earlier today Spehar at the Presidential Palace, was replying to a question on the matter.

“My impression is that Spehar adopts (the position) that the need of UNFICYP’s presence seems to be one of the most important stability factors and of avoiding any unwanted developments,” he said.

In statements earlier , Government Spokesman Prodromos Prodromou also referred to the meeting Anastasiades had with Spehar ahead of her visit to the United States where she is set to meet with senior US and UN officials, including UN Secretary General Antonio Guterres.

President Anastasiades, Prodromou said, “underlined once more the necessity for the presence of UNFICYP and its peace keeping mission.”

He realises that there are discussions and thoughts for a review of UN peace keeping missions, he said, “however during the discussion with Spehar he underlined the reasons why in Cyprus, particularly today, the mission should be continued ensuring, among other things, that conflicts and tensions are avoided,” something which is necessary since we are in a situation before the resumption of negotiations.

A second message conveyed to Spehar according to the Spokesman is President Anastasiades’ readiness for a resumption of negotiations, in line with what he has told to UN Secretary General’s envoy Jane Holl Lute, and the fact that he expects her next visit, so that the effort continues, we have the terms of reference and a resumption of negotiations.

Replying to a question as to whether the government’s position on UNFICYP will be seen under a positive light, he urged patience until the Security Council meets to decide on the matter soon.

“We believe that the Cypriot government, via the Foreign Ministry, its diplomatic mission and quite a few contacts the President himself has had, has made its case and has put forward arguments as to why UNFICYP’s presence is necessary and we believe our position will be met with understanding,” he noted.

Asked whether the UN agrees with the necessity of maintaining UNFICYP’s presence on the island Prodromou replied “yes, this is something positive and we should add it to the picture as a whole that the United Nations’ view is a similar one with that of the Cypriot government.”

Replying to a question as to whether there is any new information on Lute’s next visit to the island, he said that “there is no new information. We are waiting for Mrs Lute to let us know and to have our next meeting.”

The Government Spokesman also referred to a meeting President Anastasiades had with EPP’s lead candidate for the position of European Commission President and leader of the EPP Group in the European Parliament Manfred Weber who is visiting Cyprus. He pointed out that during the meeting with Weber it was noted that the Cyprus problem constitutes a European problem and “this is Weber’s approach on it,” adding that “under these circumstances there is a special reason to support his candidacy.”

Replying to a comment by a journalist on the Weber`s views on Turkey’s accession course, Prodromou said that the government says that we favour a relationship between Turkey and the EU. It remains for the EU to define what this course will be and what the final relationship will be, provided that those changes which harmonise Turkey with everything the EU stands for are taking place, that is to say that if fulfills its contractual obligations vis-à-vis the EU.”

By In Cyprus
Previous articleNPLs drop by €5.6 billion due to sale of CCB
Next articleBrits to vote again? Brexit delay creates headache for Europe