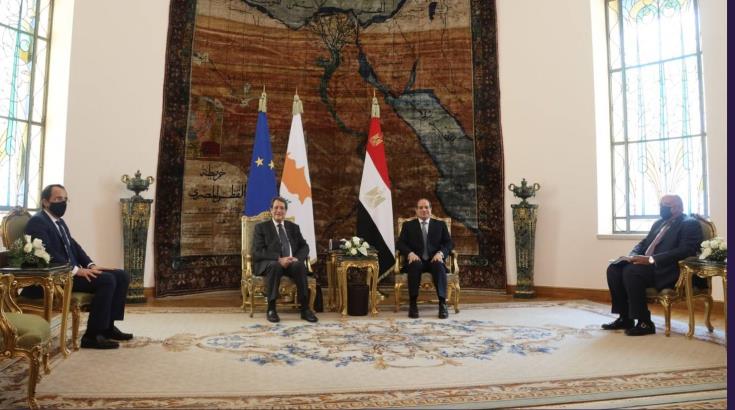 Egypt’s President Abdul Fattah al-Sisi has conveyed his country’s firm support in efforts to resolve the Cyprus issue with President Nicos Anastasiades noting both share identical views on regional issues which are in line with their vision for the creation of conditions of security, stability, peace and cooperation in Eastern Mediterranean.

Sisi made the remark during a press conference in Cairo with President of the Republic of Cyprus Anastasiades at the end of their first Intergovernmental Meeting between the two countries.

Sisi advocated respect of international law as regards the Cyprus problem and talked against meddling in the internal affairs of other states. At the same time, he expressed his country’s firm support for Cyprus.

He welcomed the Cypriot president and his entourage of ministers to their “second home, Egypt”, as he said. He underlined the great capabilities between the two friendly countries to achieve their common interests as a model of cooperation at a regional level.

Both presidents expressed their willingness for further closer cooperation in all fields.

Thanking Sisi, President Anastasiades talked about “identical views on regional issues which are in line with our vision to create conditions of security, stability, peace and cooperation in Eastern Mediterranean.

He also said the two countries “have common views on synergies that will be developed either bilaterally or through trilateral or multilateral levels, which are not turned against any of our neighbours.”.

Addressing the press conference, Sisi said the Intergovernmental meeting is part of the continued cooperation and joint wish to deepen relations between the two countries in fields of mutual interest and on the basis of handling common provocations in the region.

He also said that relations between the two countries are based on strong foundations and announced that further steps to strengthen and further develop bilateral relations have been decided in many fields such as defence and the economy but also bilateral cooperation. They also discussed the mechanism of cooperation with Greece and referred to the trilateral mechanism as a model of regional cooperation.

Referring to the situation in the Eastern Mediterranean and the Cyprus issue, the Egyptian leader said that it is imperative that all states respect international law and the UN charter as well as the principles of non-intervention in internal affairs, respect of sovereignty and territorial waters between the states. He also referred to the significance of respect of sovereign rights of states as regards exploration of their Exclusive Economic Zone, according to international law and delineation agreements.

“Our wish and hope is that any country that respects the UN charter, international law rules and the sovereign rights of all states, to become part of the synergies” he said.

Synergies, he added, such as, among others, through President Sisi’s initiative to create the East Mediterranean Gas Forum, where an important number of states in the wider region will participate.

The Egyptian President underlined his country`s firm principled position in efforts to resolve the Cyprus problem on the basis of UN resolutions and Security Council decisions, expressing solidarity towards Cyprus as regards any actions which are directed against the sovereignty of the Republic of Cyprus or that these actions are attempting to impose fait accompli, in violation of UN resolutions. These actions undermine efforts to resolve the Cyprus issue on the basis of reuniting it.

Sisi also said that the next trilateral meeting with Cyprus, Greece and Egypt will take place in October in Greece.

On his part, President Anastasiades referred to the “excellent relations between Cyprus and Greece in al fields and the common will of both governments to further strengthen relations”. He also described today`s conference “historic”.

The conference, he said, proves not only the excellent level of relations but also the common will to substantially strengthen the already rich cooperation framework  and at the same time further upgrade and strengthen our political and economic bonds.

The president said the Cypriot ministers of Foreign Affairs, Defence, Energy, Agriculture, Education and Shipping, who accomapnied him, had the opportunity to review the already close cooperation between the two states and develop ideas and views to further expand them.

In the field of trade, he said they agreed to hold business forum at regular periods to enhance the chambers of commerce to increase trade, services and goods, especially pharmaceutical and aquaculture products.

With regard to Energy, instructions were given to speed up the work of the Joint Committee set up for the implementation of the Intergovernmental Agreement between the two countries for the construction of a submarine gas pipeline, as well as the EuroAfrica interconnector.

For this reason, a meeting of the relevant technical committees has been scheduled for 15th September.

In addition, on the basis of the Cyprus-Egypt Agreement in the Electricity and Renewable Energy Sources sector, the exchange of know-how in these sectors was agreed, especially as regards the utilization of solar thermal and photovoltaic systems, as well as the production of green hydrogen.

President Anastasiades thanked his “brotherly friend, President Sisi, for the understanding and firm and unwavering principled stance which Egypt maintains in efforts to find a solution to the Cyprus problem on the basis of UN resolutions and condemning the unlawful actions of Turkey either in the Republic of Cyprus Exclusive Economic Zone or in creating new fait accompli on the island”.

I had the opportunity, he said, to inform President Sisi on the latest negative developments concerning the solution of the Cyprus problem, after the Turkish side’s new positions and actions which diverge the Cyprus problem from all that the UN resolutions and UNSG’s terms of reference define, the President added. He reminded the Turkish demand for a change of the basis for a solution through the recognition of two independent states and the unlawful actions regarding the change of status of the fenced off city of Famagusta.

I reconfirmed to my friend, the President, that our position remains unwavering and strictly dedicated to finding a solution that will be based on the High Level Agreements, the UN resolutions and of course the acquis communautaire. At the same time, the President said, he informed Sisi on the number of initiatives undertaken by the government to allow the resumption of a meaningful and constructive dialogue which will overcome today`s deadlock caused by the Turkish positions and actions.

The two leaders also discussed the latest international developments, especially the events in Afghanistan, the efforts for peace and the settlement of the conflicts in the Eastern Mediterranean and the Middle East, the creation of the necessary conditions for the resumption of the Middle East Peace Process, “reiterating once again our appreciation for the very constructive role that Egypt has played over time. Reference was also made to the need to stabilize the internal situation in Libya through disarmament, and the withdrawal of all foreign troops, as well as to hold national elections on a set date”.

During his talks with Sisi, President Anastasiades, discussed the EU-Egypt relations, where the determination of the Republic of Cyprus to contribute to the achievement of a partnership was once again conveyed especially in areas of common interest, expressing the full support of Cyprus in its efforts renew the Partnership Priorities agreed between the EU and Egypt for the period 2021-2027, as “our view is firm that Egypt is an important and reliable partner of the Union, but also a stabilizing factor in the region in important areas, such as security and stability, the fight against terrorism and deterring migration flows.”

President Anastasiades once again extended the people of Cyprus` condolences to the families of the four Egyptians who perished in the forest fires of July on the island.

The Egyptian Presidency said, in a statement that the deliberations of the Intergovernmental meeting contributed in re-examining the various issues of cooperation among the two countries with reference to energy issues as well as defence, agriculture, fish farming, tourism and transport, strengthening of trade relations and cooperation in scientific research and higher education between the two states.

The statement also said the two presidents underlined that the Intergovernmental Meeting is a new starting point to promote and strengthen cooperation and integration between the two friendly countries, paying attention to strengthening bilateral relations and supporting the common interests of both peoples’.