Senator Menendez: “Great moment” for Cyprus to form new relationship with US and West 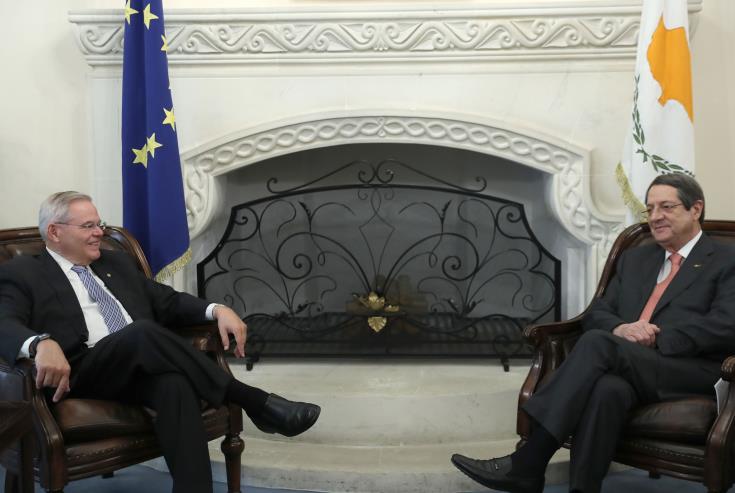 US Senator Robert Menendez said this is “a great moment for Cyprus” to form a new relationship with the United States and the West, after a meeting with the President Anastasiades in Nicosia.

In statements to the press, at the Presidential Palace, Menendez said he had an excellent meeting with President Anastasiades and pointed out his personal, long relationship with Cyprus.

He added that they discussed about many important issues, such as Easter Mediterranean’s security strategy, energy strategy, Cyprus’ continuous engagement with the United States, questions of US foreign policy in the region, economic questions and the changing dynamics of Cyprus in its banking zone.

“We had a very extensive, very positive discussion and I look forward to continue deepening the relation between the United States and Cyprus. I think there is a great moment for Cyprus, to find a whole new day in its relationship not only with the United States, but with the West,” he said.

Government optimistic for the lift of US arms embargo

Speaking to the press, after the meeting, Government Spokesman Prodromos Prodromos expressed optimism for the lift of US arms embargo on Cyprus.

Menendez and Republican Florida Senator Marco Rubio submitted a bill aimed at lifting the embargo on the sale of arms to Cyprus.

Prodromou pointed out that military equipment was not the issue, however the political embargo which was imposed in another time, was dissonance in the strategic relationship of Cyprus with the US. He also noted that it was important the fact that the bill  has been tabled by both major political parties in the US, something that “improves the possibilities and shows that this is a national issue for Cyprus and the United States”.

Prodromou added that the President and Menendez reviewed the strategic relationship and partnerships developed by the Republic of Cyprus, as a state that guarantees stability and security in the region with neighboring countries such as Egypt, Lebanon and especially Israel and its role as an extension of the EU to the Eastern Mediterranean.

“All this also serves the geostrategic interest of the US, especially since it is now being strengthened with the specific energy interests of US companies operating in Cyprus”, he said.

The spokesman also noted that the President brought up the issue of the Peacekeeping Force in Cyprus, pointing out that in any change to UNFICYP status, poses a risk to the stability that has existed in recent years.

With regard to the Cyprus issue, he said that the President asked for assistance, in order for Turkey to change its attitude and cooperate in the attempt to resume negotiations.

“It was a very good meeting, and through senator Menendez, who is a very good friend of Cyprus we expect that he will continue, not only at the level of the US government, but also in the parliamentary bodies, especially in the Senate, the good work done for Cyprus – US relations, ” Prodromou said.

Spokesman: Excellent cooperation on the issue of capital flows

Spokesman also said that the President and the US senator discussed the excellent cooperation of Cyprus with US authorities on capital flows.

As he said, following the financial crisis the system of Cyprus has been fortified with decisions and actions taken by the Central Bank of Cyprus, in order to limit as much as possible, the cross-border movement of capital associated with illegal activity, such as terrorism, drug trafficking or weapons.

He also said that the President informed Menendez on the measures taken regarding the citizen by investment scheme, while the Republic of Cyprus is in the process of employing international firms to ensure the integrity of the system.