Security Force Police (SFP) on Tuesday celebrated 70 years of guarding camps in the British Bases with a parade in Episkopi.

Over 90 people from the SFP paraded as the Bases Administrator Air Vice Marshal Peter Squires thanked them and their forbears for their service since the organisation’s creation in 1952.

In a speech to mark the 70th anniversary outside the Bases Headquarters, Air Vice Marshall Peters, said:

“70 years of dedicated service to the Bases. You have been the eyes and ears of the Bases. You have seen the Bases evolve, but you have remained steadfast and reassuring constant to us all. Always professional; always polite, always with a smile on your faces.

Originally formed as the War Department Auxiliary Police, the SFP has seen its name change five times over the decades before it finally settled on its current moniker in1995.

The parade of current personnel, employed from communities across Cyprus, were keen to take forward the strong legacy their predecessors have left.

“I am very proud of my Team, for their professionalism and the hard work they all do.

“This force has seen over 20 Bases Administrators come and go, and I consider myself lucky to be leading it into the next chapter of its proud history.

“Our mission is to protect the MoD’s property and installations but also all those who work and live on the camps. We work 24/7, 365 days per year to achieve that.

The Security Force Police celebrated 70 years of outstanding service to the British Bases today. Here’s to the next 70. #BritishBases #Cyprus #SBAs pic.twitter.com/QV3qHqcqM7

Chief Petrou, admitted that the SFP have dealt with a variety of security issues over the years – including suspicious people and packages, unregistered vehicles, trespassers and protests.

‘’SFP is a key employer in Cyprus and a highly regarded Force with a forward-leaning and positive approach. We are the front line of Security; and we are highly recognised amongst the BFC Community. 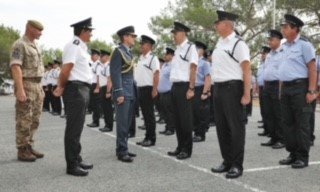 By Stelios Marathovouniotis
Previous article
First Apple reseller store in Paphos to open on November 18
Next article
Gender pay gap: For every euro men earn in Cyprus, women get 91 cents