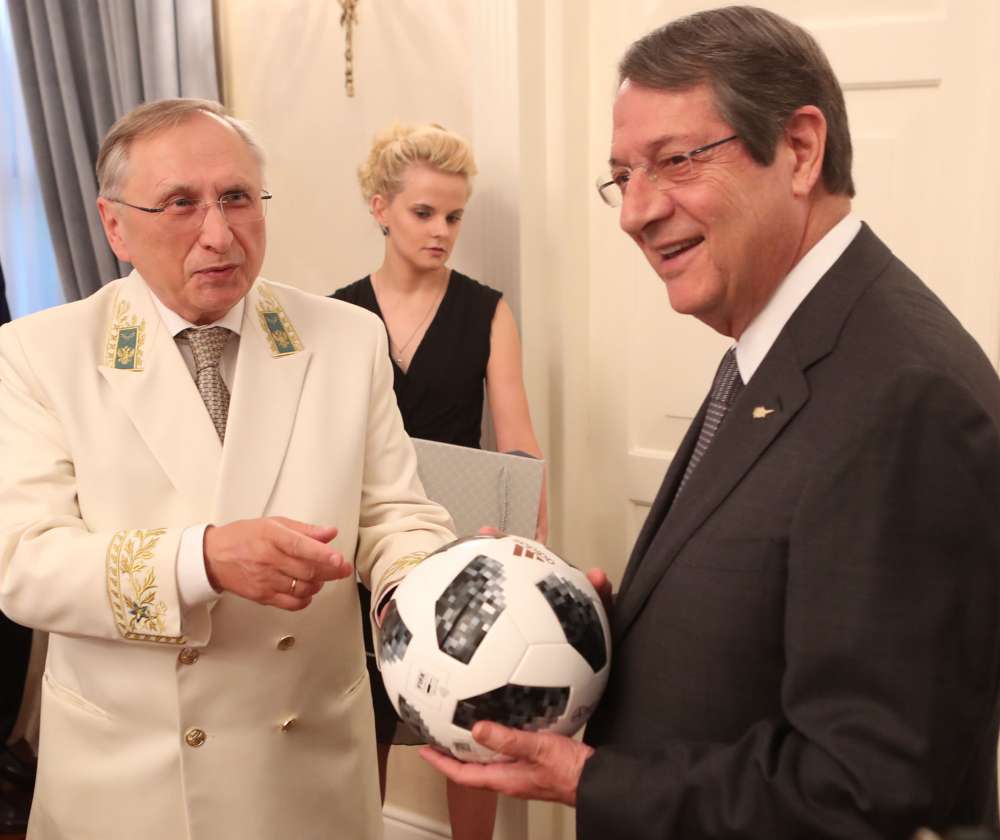 The Russian Federation as a permanent member of the Security Council could assume a more active role as regards the external dimension of a settlement of the Cyprus problem and the new security arrangements, President Nicos Anastasiades has said.

Speaking during a reception at the embassy of the Russian Embassy in Nicosia, on the occasion of the National Day of Russia, Anastasiades reiterated his strong commitment to immediately engage in a new dialogue and negotiate a solution in the framework set by the UN Secretary-General, the relevant UN resolutions and the EU values and principles.

On his part, Russian Ambassador Stanislav Osadchiy stressed that Russia is not going to pull back from its position of principle on the Cyprus issue and will always stand for finding a formula of settlement without imposing artificial timeframes and schemes, which will meet best the aspirations of both communities. We want to see a peaceful, flourishing and united Cyprus, he noted.

He went on to say that it is necessary to acknowledge that the current system of security guarantees of Cyprus is outdated and contradicting modern realities and that Russia has a firm and unchanged position in favour of a just, comprehensive and viable solution of the Cyprus problem for the benefit of every Cypriot.

President Anastastasiades stressed in his address that “our unwavering goal, as indicated through the proposals we submitted at the Conference in Crans Montana, is to reach a viable, functional and lasting settlement, fully in line with international and EU law, that will reunite Cyprus in a truly independent and sovereign state and which will fully embody common prosperity and peaceful co-existence for all its citizens.”

“To this end, in anticipation of a potential visit of a special envoy of the UN Secretary- General with the aim to hold deliberations and consultations with all relevant parties in order to establish the way forward, I would like to reiterate, yet again, my strong commitment to immediately engage in a new dialogue and negotiate a solution within the framework set by the Secretary–General, the relevant UN resolutions and the EU values and principles,” he added.

He stressed that “this implies that my determination should be reciprocated, while at the same time Turkey and the Turkish Cypriot side should refrain from any illegal actions or any unacceptable positions and demands that will not be conducive to resuming the process.”

“Taking this opportunity I wish to once more stress the appreciation of the Government and the people of Cyprus to Russia’s long-standing principled stance on the Cyprus Problem and its support to our efforts to reunify Cyprus and its people,” he noted.

Both Anastasiades and Osadchiy stressed the long-standing and very close relations between Cyprus and Russia.

They also referred to the forthcoming FIFA World Cup that will be hosted in Russia and Osadchiy presented Anastastasiades with an official ball of the World Cup 2018.

By In Cyprus
Previous article
Delivery man held after taking food to Paphos police
Next article
G7 leaders set to clash with Trump over tariffs, trade