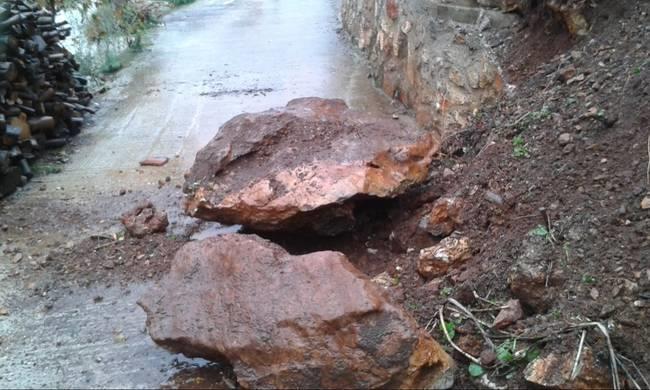 Heavy rains overnight have led to rockfalls and mudslides on a number of roads, while roads to Troodos are open only to four wheel drive cars and those equipped with snow chains. There is 50 cm of snow in Troodos Square.

The first, warning of heavy rain and thunderstorms, is in place until 10 pm. In its second alert,  in force from 8 am to 8 pm on Tuesday, the met office warned of strong winds saying the southwesterly wind mean speed is expected to be 7 Beaufort (near gale) and locally 8 Beaufort (gale) over the coasts.

In an update on road conditions early on Tuesday morning, police said that all roads are slippery and dangerous.

They said that because of mudslides and rock slides the Gerasa-Kalo Chorio road is closed. The left lane of the Karvouna-Troodos road is also closed after a rockfall.

The Kelokedara-Amargeti-Nata road and Tselefos bridge are closed because of
flooding.

Stones and mud has also fallen on the Nicosia-Larnaca highway, near the Lymbia exit. The spot has been signposted.

Because of snowfall the following roads are open only  to four wheel drive cars and those equipped with snow chains: Platres-Troodos, Karvounas-Troodos and Prodromos-Troodos.

There is thick fog in the Ayia Varvara-Panayia and Panayia-Polemi area in the Paphos district and visibility is low.

Because of weather conditions, roads are dangerous police said and urged drivers to be particularly careful, to drive slowly, keep a safe distance from other vehicles and switch on their headlights.

Tuesday will be mainly cloudy with rain in most areas, isolated thunderstorms and snow in the mountains. Winds will be very strong and the sea rough. Temperatures will be 16 C inland, 17 C on the coasts and 4 C in the mountains.

Tonight will be mainly cloudy with rain in most areas, isolated thunderstorms and snow in the mountains. Winds will be very strong and the sea rough. Temperatures will fall to 7 C inland, around 10 C on the coast and 2 C in the mountains.

Wednesday will be cloudy at intervals with scattered rain and possible  isolated thunderstorms. Snow is expected in the mountains.  Temperatures will drop to below average for the time of year.

Thursday will be mainly fine with temperatures edging up to close to average for the time of year.

Friday will start off mainly fine with increased local cloud as from the afternoon. Temperatures will edge up to average for the time of year.