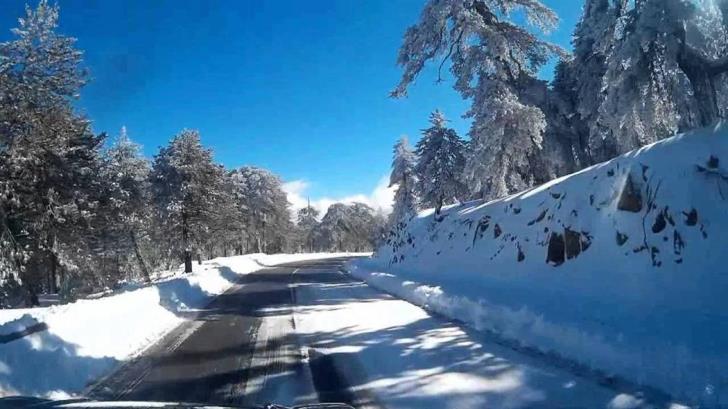 All roads to Troodos are closed on Monday morning because of ice, while there are problems on a number of other roads in hilly areas.

Temperatures are below normal for the time of year. Scattered showers are expected today while a new low pressure system from tonight will bring more rain and snow.

Police said that all roads to Troodos  (Prodromos -Troodos, Platres-Troodos and Karvounas-Troodos) are closed to all vehicles, because of ice.

The Akrountas-Dieronas road is closed because of mudslides and rock falls.

In the Paphos district the Amargetis-Kelokedara road is closed because of flooding of the Zyripilli river while flooding of the Xeros road has closed the Galataria-Salamiou road. Tselefos Bridge remains closed.

Mudslides and rock falls have occurred on the Paramytha-Gerasa,  Gerasa-Kalo Chorio and Ayios Ioannis -Agros roads.

Moreover, because of heavy rain a section of the main Paphos-Polis Chyrsochous road, some 2 km outside Stroumbi towards Yiolou has receded. The section has been signposted.

Meanwhile,   scattered showers are forecast for today, with temperatures at 14 C inland and on the coasts and 3 C in the mountains.

A new low pressure system is expected to bring rain and isolated thunderstorms from late tonight when temperatures will drop to 5 C inland, around 9 C on the coasts and -3 C in the mountains. Frost is expected in the mountains and in places in hilly areas.

Tuesday will be mainly cloudy with scattered showers and isolated thunderstorms. More snow is expected in the mountains, while snow or sleet is possible at night in hilly areas. Temperatures will drop and will be below average for the time of year.

Wednesday will be cloudy at intervals with temperatures remaining at the same levels as Tuesday.

Thursday will be cloudy at intervals with scattered showers and possible thunderstorms and snow and sleet in the mountains. Temperatures will edge up but remain below average for the time of year.