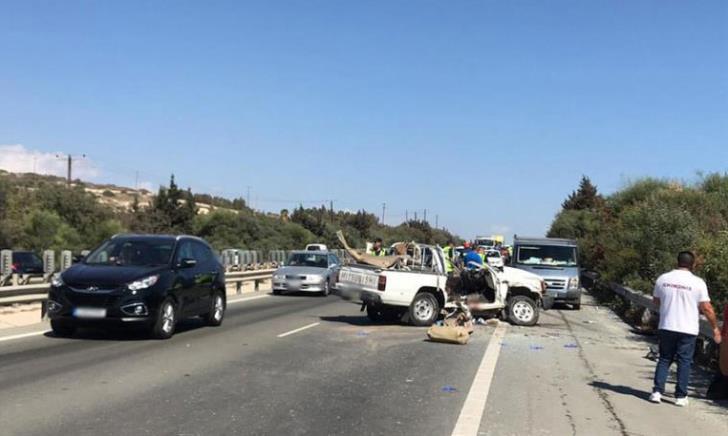 Relatives of two Egyptian men killed in a double fatality on the Nicosia-Limassol highway on Tuesday have criticised authorities of time consuming procedures.

The relatives went to Limassol Hospital on Thursday asking to take the bodies of their loved ones so that they can be taken to Egypt for burial.

But authorities said this could only happen once all the necessary examinations have been completed.

Tempers rose, and there was some tension and the police was called in.

The deadly crash occurred near Pareklissia on the Nicosia-Limassol highway.

One of the fatalities is the driver who had picked up the three passengers in the double cabin pick up from Larnaca Airport. They had just arrived in Cyprus on work permits.

Police said the accident occurred when the axle of a truck fell and another vehicle veered to avoid it, colliding with the double cabin pick up which was in the right hand lane.

The driver and one of the passengers were killed. A third man is in critical condition while the fourth sustained lesser injuries. None of them were wearing seat belts.

By In Cyprus
Previous articleMufti supports return of icons kept in Kyrenia castle to the Orthodox Church
Next articleQuiz: Do you know which of these animals are endemic to Cyprus?