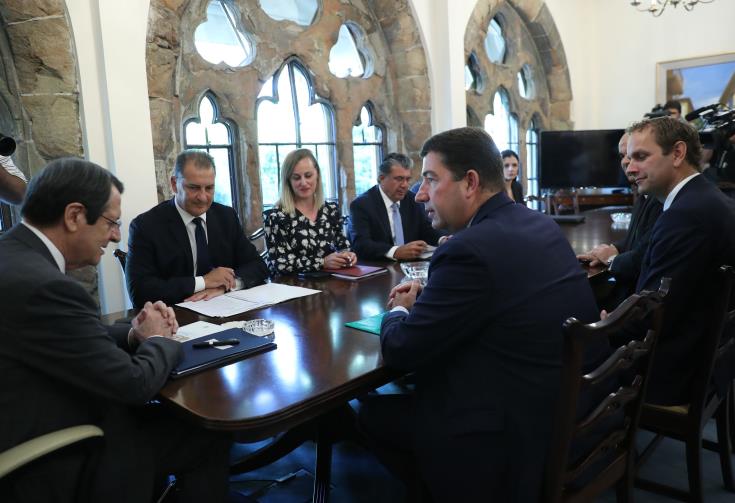 Energy Minister Yiorgos Lakkotrypis has said that he expects to receive this week, a revised development and production plan for “Aphrodite” gas field, off Cyprus

Replying to journalists’ questions after Shell executives were received by President Nicos Anastasiades at the Presidential Palace, Lakkotrypis also said that according to the timeframes given by the consortium, the gas field is expected to produce natural gas by 2025 and that it is intended that a second confirmatory drilling takes place.

Referring to the meeting with Shell, he said that Executive Vice President Venter De La Rei has taken over the region’s portfolio and today “was a first opportunity for him to meet with the President and to discuss developments both in the region and certainly where Cyprus is concerned.”

“An exchange of views took place as to how we can move forward with the gas field’s exploitation as quickly as possible,” he pointed out.

Replying to a question on that, he said that the government is in consultations with the consortium on the development and production plan.

“We expect to receive a new edition of the plan in the coming days,” he noted, adding that once it is agreed on, then together with the revised contract they will be presented before the Cabinet. If it issues a positive decision on the matter then an exploitation license will be issued for the project to go ahead, Lakkotrypis said.

Asked about timeframes, he said the consortium has presented a timeframe of 2025 for natural gas production.

Asked whether the Egyptian LNG terminal will wait for the “Aphrodite” gas, he said that “since changes that need to be made at Idku are under discussion, we believe the answer is yes”.

Replying to a question as to a second confirmatory drilling, Energy Minister said that “it is intended for a second confirmatory drill to take place in the “Aphrodite” gas field which will show us with greater precision the quantities of natural gas that can be exploited.” Asked when it is expected to take place he said the matter is “under discussion.”

Asked on the matter of a pipeline to be constructed from “Aphrodite” to Egypt, Lakkotrypis said that there is a lot of work still to be done from a technical and economic point of view.

The consortium of companies licensed for the “Aphrodite” gas field is comprised of Noble Energy, which acts as the operator, Shell and Delek.