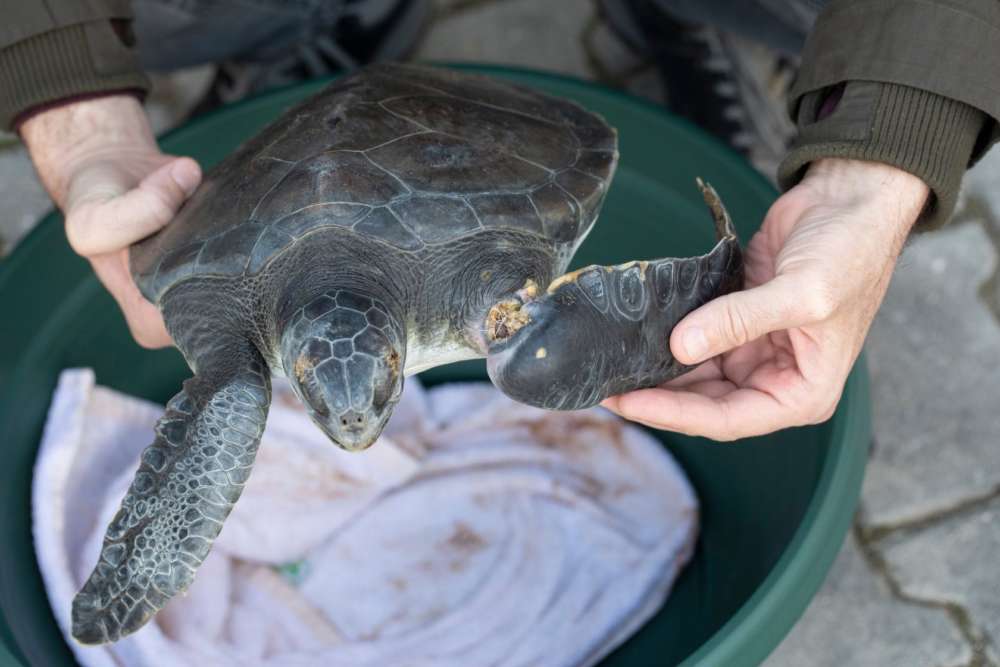 A juvenile green turtle was found stranded alive in Cyprus and rescued by SPOT — the Society for the Protection of Turtles.

In a post on Twitter, INDICIT ll — an EU-funded research project focusing on plastic pollution and its impact on marine animals — said that the turtle’s head, front and rear flippers were entangled in old mesh bags.

“The front flipper will probably have to be amputated but overall survival prospects are relatively high,” INDICIT ll added.

A SPOT representative said the turtle was found by locals walking on the beach which alerted the NGO.

“Polypropylene sacks are a leading cause of the debilitating entanglements. The sacks are used in agriculture and industry and can be seen at construction sites, open dump sites and in fields. Through the INDICIT project we collect these data to inform policy at national and international levels. Certainly, local action is needed to reduce the flow of these items into the sea,” the representative added.

Cyprus is an important nesting place for the green turtle (Chelonia mydas) and loggerhead turtle (Caretta caretta). In the Mediterranean region, green turtles nest almost exclusively in Cyprus and Turkey while the loggerhead also nests in Greece and in other Mediterranean countries in smaller numbers.

A juv. green #turtle was found stranded alive in Cyprus. It's head, front & rear flippers were entangled in old mesh bag. The front flipper will probably need to be amputated but overall survival prospects are relatively high🤞
📸 from Olkan Eruler
Thanks to @spot_turtles pic.twitter.com/oCRNPpd5pX

INDICIT II (Implementation Of Indicators Of Marine Litter On Sea Turtles And Biota In Regional Sea Conventions And Marine Strategy Framework Directive Areas), is a two-year project (February 2019 – February 2021 funded by the European Union, and continues from the INDICIT I project which ran from 2017 – 2019.

The consortium is committed to support the implementation of EU’s Marine Strategy Framework Directive (MSFD) and other international environmental policies aiming at protecting the marine environment (especially the Barcelona convention, the OSPAR convention, the HELCOM  etc).

INDICIT II focuses on the Descriptor 10 of the MSFD (“Marine Litter”), which aims to maintain or achieve the Good Environmental Status (GES) of the marine environment by 2020 with respect to marine litter.