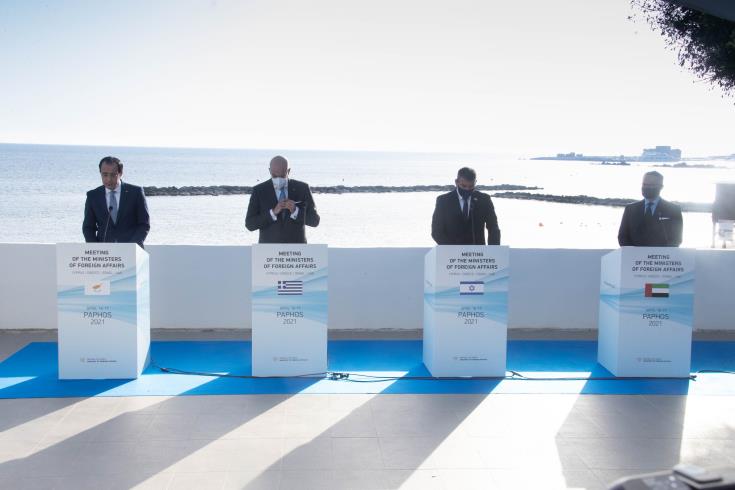 The Ministers of Foreign Affairs of Cyprus, Greece, Israel and the United Arab Emirates held their first joint meeting on Friday in the coastal town of Pafos -a meeting made possible by the recent normalization of relations between Israel and the UAE- stressing the importance and symbolism of this meeting for the cooperation, peace, stability and prosperity of the region.

The meeting was attended by Cypriot Foreign Minister Nikos Christodoulides, the Foreign Minister of Greece Nikos Dendias, of Israel, Gabi Ashkenazi, and of the United Arab Emirates Emirates, Sheikh Abdullah Bin Zayed Al Nahyan who participated through teleconference and was represented at the meeting by the Diplomatic Adviser of the President of the UAE and former Minister of State for Foreign Affairs, Dr. Anwar Gargash.

The Cypriot Foreign Minister said that the meeting signifies the new era the region has entered, driven by a common vision of stability, prosperity and peace through cooperation.

He also said that he briefed them on the latest developments on the Cyprus problem, adding that “we all agreed that a reunified Cyprus must be a functional, viable sovereign state, with no foreign interference and anachronistic systems that have no place in the 21st century”.

Among the issues they discussed were the situation in Libya, Syria, Yemen, the situation in Afghanistan, JCPOA, energy, civil protection, genetics and molecular medicine, education, the pandemic, digital innovation, tourism, climate, defence.

During their statements, following the meeting, they stressed that their cooperation is open for other countries of the region.

Taking the floor, Christodoulides said that “as cooperation is further enhanced we see a path to institutionalising this cooperation in a regional forum for cooperation and security always based on a positive agenda”.

He stressed that the path is open for all countries of the region to join, given that they respect good neighbourly relations, sovereignty and territorial integrity of all countries, and adhere to international law.

Referring to the informal conference on Cyprus that will take place in Geneva  this month, he said that the Greek Cypriot side goes to the meeting “steadfastly committed to resuming negotiations for reunifying Cyprus in a bi-zonal bi-communal federation, with political equality, fully in line with UNSCRs, international and EU law. We and the international community expect the same of all other actors involved”.

In his statements, the Greek Foreign Minister said that what unites the four countries  are common principles, such as good neighborhood relations and peaceful resolution of disputes on the basis of international law, such as the UN Convention of the Law of the Sea.

Our cooperation is open to all provided they respect those values, he underlined.

Dendias said they discussed cooperation on a number of areas, such as energy and underlined the importance of the EastMed gas pipeline and renewable energy sources.

He said he briefed his colleagues on his visits in Libya, saying that in view of the elections in December, one fundamental precondition is the withdrawal of all foreign forces present on the ground in Libya, a position they all supported.

Dendias said that he also addressed the meetings he had yesterday in Ankara. ‘In this context I reiterated that each side has its own views, clearly manifested during the press conference”, he continued.

He underlined the commitment of the Greek government to seek a positive agenda in its relations with Turkey, starting with economic and trade relations.

The Greek side submitted, during the Ankara meeting, a series of proposals in that regard, and so did the Turkish side. I have also extended an invitation to my Turkish counterpart, Mevlüt Çavuşoğlu, to visit Athens, Dendias said.

In his statements, the Israeli Minister said that the countries share a similar view on the Middle East and its future and noted that the meeting is one of the results of the change that has taken place in the Middle East over the past year.

This change, he said, has created a real opportunity to change the face of the Middle East adding “and if you don’t believe that, ask yourself if you could have seen this picture only just a year ago”.

“We want the meeting today to become a permanent framework that we also extend to a working level” he said, adding that they discussed a number of areas of cooperation, including energy.

“We hope that this will lead to an energy partnership between the Eastern Med and the Gulf” he said, stressing that the opportunity and the potential are huge.

In addition, he said that with the crisis facing tourism due to the pandemic, cooperation in this field is key success factor. Furthermore, he said that they have built a framework for cooperation in dealing with emergencies, including fighting fires.
He said that they discussed challenges “that Iran and Hezbollah and other extremists pose to the stability of the Middle East and regional peace”, adding that “we will do what ever it takes to prevent these extremists to success and we will prevent this regime from having nuclear weapons”.

Israel, he said, is committed to the regional cooperation and invited them to a working level meeting in Israel as soon as possible.

“Together we can turn our vision of cooperation into reality that will improve the lives of all our citizens”, he concluded.

Diplomatic Adviser of the President of the UAE and former Minister of State for Foreign Affairs, Dr. Anwar Gargash, who represented at the meeting the UAE Foreign Minister, said that the regular holding of these conversations and consultations “solidifies the relations between our nations” adding that through such dialogue “we are able to gain a deeper level of joined understanding and higher levels of cooperation and addressing the various challenges facing our region”.

He said they also discussed their shared visions for future cooperation and joint understanding of regional issues including the energy security in the region and the fight against COVID19.

“We shared our visions on future cooperation and explored new avenues to expand our ties in various sectors such as trade, investments, manufacturing, technology, science, health services, and food products” he said.

The UAE, he added, shares with its friends and allies a common understanding of the need to engage in joint efforts  to support regional stability and noted that the political solution is the only way to resolve and end the current crisis in the region.

“Our discussions today focused on ways to enhance joint action to face the repercussions of COVID19 and how to strengthen high level cooperation in fighting the virus and protecting the health of our people. We explored the avenues of strengthening our cooperation in areas of using technologies to fight COVID, medical research and the  distribution of COVID vaccines” he concluded.

They all thanked the Cypriot Foreign Minister for hosting this quadrilateral meeting.

By gavriella
Previous articleInquiry Committee: 51.8% of all exceptional naturalizations exceeded the law
Next articleArson early this morning in Limassol