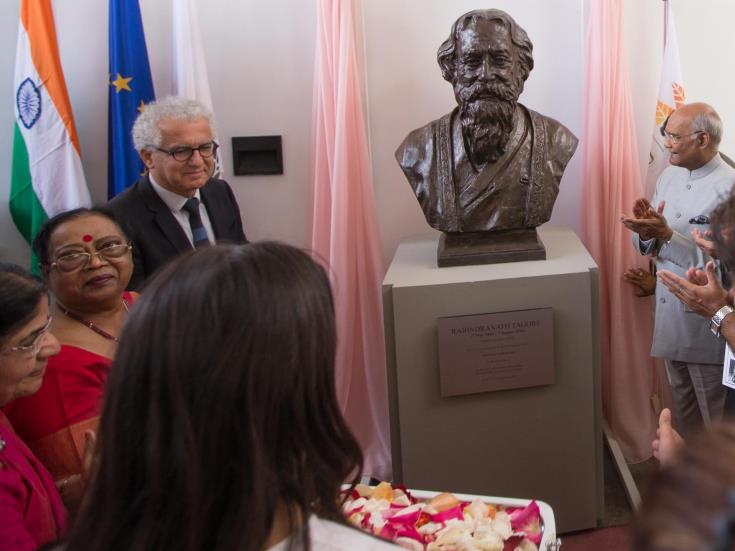 India’s President Ram Nath Kovind has advised students at the University of Cyprus (UCY) saying that while technology has opened a new world of learning and has made it easier to accomplish tasks, they should continue to work hard without expectation of immediate reward, in pursuit of excellence.

With his lecture at UCY entitled “Youth, technology and ideas: Shaping the contours of the 21st century” and a ceremony unveiling the bust of Indian poet and Nobel Laureate in Literature Rabindranath Tagore, Kovind concluded an official visit of Cyprus.

Referring to the university, Kovind said that “the works of Nobel Laureate Christopher Pissarides and the cutting-edge research being undertaken in this Campus are truly inspirational.”

“Technology, indeed, has opened a whole new world of learning,” he pointed out, adding that “it has also made it easier to accomplish our tasks.”

“You should, however, not get carried away by the instantaneous nature of technology. You must continue to work hard without expectation of immediate reward,” he told university students.

The pursuit of excellence, he stressed, “should be the key factor that should dominate the minds of future generations.”

Kovind quoted Tagore who said that “the highest education is that which does not merely give us information, but makes our life in harmony with all existence.”

“These words of wisdom are more relevant today when we try to find our balance in the new world of technology and environmental action,” he pointed out.

On the challenge of climate change, he expressed the view that the problem is not insurmountable. “India and Cyprus have lived in harmony with nature for centuries. It is time for us to bring back our sustainable practices into our modern lives. New age technology combined with the wisdom of the past can solve many of our ecological problems,” he said.

Referring to the celebrations to mark the 150th birthday of Mahatma Gandhi on October 2, India’s President stressed that “his message of peace, compassion and justice may always guisde us as we seek to create a better world for ourselves and for others.”

Referring to the bust of Nobel Laureate in Literature Rabindranath Tagore, Christophides said that its presence on campus will be an opportunity for students and guests and the community to learn about the first non-European to win the Nobel prize in Literature.  “It will be a stimulus for discussion of literature, social sciences and the importance of culture in general,” he pointed out.

Universities, he stressed, “are places challenging peoples’ limits, spirits and minds, daring people to put their imagination in practice.”

“Don’t limit a child to your own learning for he was born in another time,” he noted.

By In Cyprus
Previous articlePaphos hotels see occupancy rates of 90% in September, October
Next articleClapton, Churchill among those honoured by Royal Albert Hall “Walk of Fame”