Protesters will once again call for House President’s immediate resignation 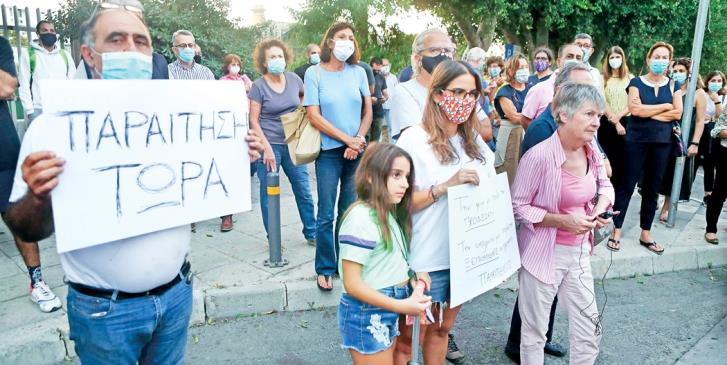 Protesters on Wednesday afternoon will gather outside the International Conference Centre in Nicosia where Parliament temporarily convenes to demand the immediate resignation of House Speaker Demetris Syllouris.

Syllouris was shown in an Al Jazeera embarrassing video on Monday ready to sell a Cyprus passport to a rich man with a criminal record.

Dozens of people had protested outside Parliament on Tuesday afternoon, as well, calling for an end to corruption and for transparency in EU member Cyprus.

The protesters were holding placards with slogans such as ‘Cyprus does not belong to you to sell it’ and ‘Resignation Now’ and some called for prison sentences for all involved in new scandalous revelations by Al Jazeera.

Organiser of the demo was former head of the European Parliament’s press office in Cyprus Alexandra Attalides and among the protesters was also former EU Commissioner Androulla Vasiliou who said the situation was unacceptable.

“We want to be able to say we are from Cyprus and feel proud of this and not feel ashamed,” the former first lady also said.

Syllouris, who initially denied any wrongdoing after the release of the shocking video changed his mind on Tuesday and announced he will be abstaining from his duties starting Monday.

His decision, he also said, was pending the conclusion of an investigation into the Al Jazeera video.

In the meantime, the island’s citizenship for investment scheme has been suspended.

Wednesday’s protest is at 6pm and mass participation is expected.