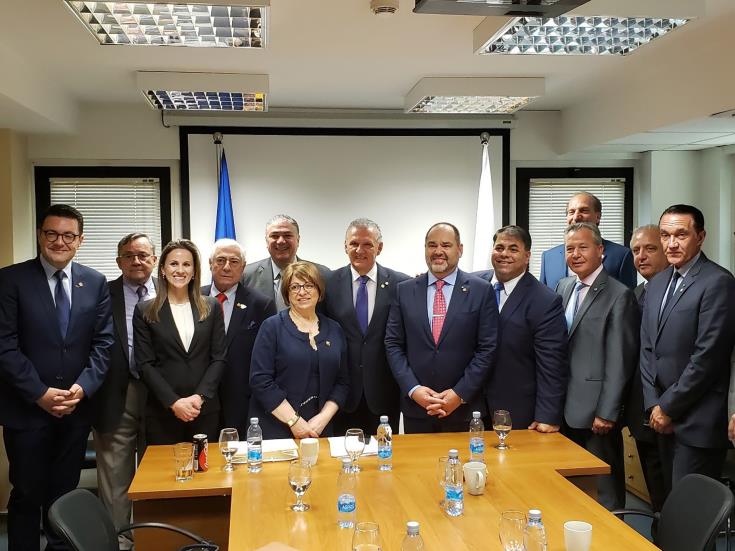 Presidential Commissioner Fotis Fotiou met on Tuesday with AHEPA Supreme President George Loucas and his delegation and briefed them on Turkish provocations in the exclusive economic zone (EEZ) of Cyprus and efforts to locate missing persons.

According to an announcement by the Presidency of Cyprus, during his meeting with Loucas and his delegation, Fotiou referred to the recent illegal activities of Turkey in the EEZ of the Republic of Cyprus and the protests to EU intuitions and member states, which he said are ongoing.

The Presidential Commissioner also referred to the humanitarian issue of missing persons and briefed AHEPA about the problems and difficulties they encounter, due to the negative stance of Turkey.

He also referred to the dramatic decrease in locating remains of missing persons in the Turkish-occupied part of Cyprus, due to the lack of Turkey’s cooperation and underlined the importance of exerting pressure on Ankara to solve this humanitarian problem.

Fotiou also briefed the delegation of AHEPA on diaspora matters and highlighted the importance of implementing actions in the United States, where the diaspora is numerous and well-organized.

He also thanked AHEPA Cyprus for donating a copy machine to the Rizokarpaso Primary School for Greek-Cypriot enclaved pupils.

Lucas assured on his part of the organization’s interest about diaspora-related activities and expressed his will to help in any way, in order to solve the problem of missing persons and end Turkish provocations in the EEZ.

By In Cyprus
Previous articleTwo children killed in Japan after car rams into group
Next articleBlast near shrine in Pakistan, nine dead – police