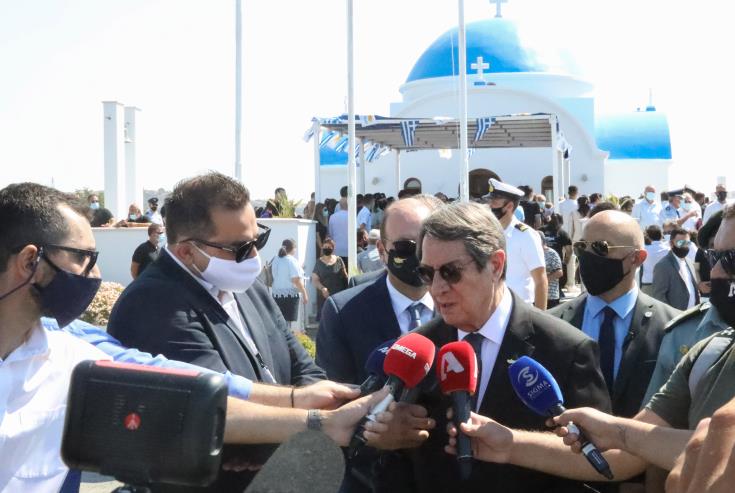 Cyprus President, Nicos Anastasiades, has said that he would like the UN Secretary – General to be more clear as regards the issue of Turkish occupied Famagusta and in general.

In statements to the media, after the memorial service for the 13 victims of a huge blast at the naval base “Evangelos Florakis”, in Mari, ten years ago, and invited to comment on the draft report of the UN Secretary – General on Cyprus, Anastasiades said that what has been written down is being evaluated point by point, and any comments will be conveyed to the UN in the coming days.

Invited to comment to the UNSG`s reference to “equal inherent rights”, Anastasiades said that “it is well known that in the 11th of February 2014 Declaration and the Constitution of 1960 a form of inherent rights is being recognised for the people of Cyprus, either Turkish Cypriots or Greek Cypriots.”

Asked about the timing that the UNSG has chosen to make such references, Anastasiades said that he is not a UN spokesperson, noting that this is probably an appropriate version of what the Turkish Cypriots want to turn into sovereign equality.

Replying to a question on the issue of Famagusta and the forthcoming illegal visit of the Turkish President, Recep Tayyip Erdogan, to Cyprus` Turkish occupied areas, Anastasiades said that the National Council will convene on July 14.

“We will discuss the whole situation, how conditions are being formed and of course any threats expressed through Erdogan`s statements or Turkey`s actions and are related to the illegal settling or further steps that change the status quo in Famagusta,” he added.

Asked if the Cyprus government representations are expected to yield any results, the President said that representations have been made towards every direction, the EU, the US President and the heads of the rest of the UN Security Council permanent states.

“I would like the Secretary – General to be more explicit as regards the issue of Famagusta and in general,” he noted, adding that there are must be an end to the diplomatic way of referring to unacceptable situations, because this is considered to be a form of tolerance.

“The report will be evaluated thoroughly and we will note whatever does not respond to or does not describe real facts,” he added.