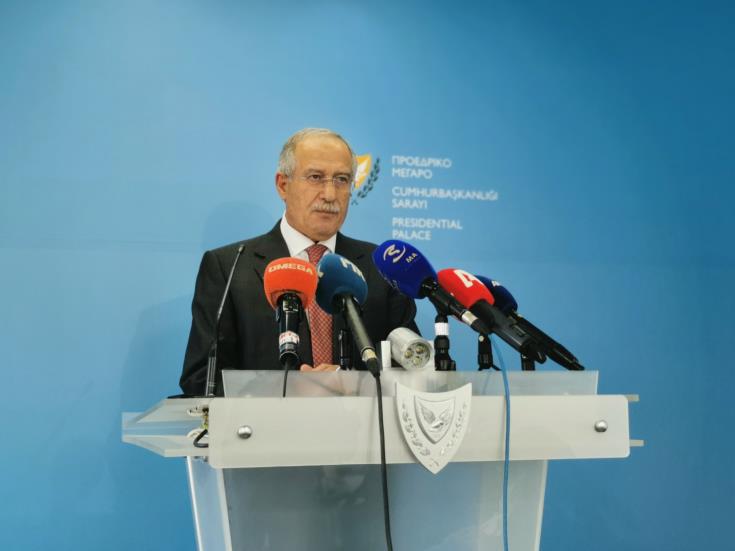 Cyprus President, Nicos Anastasiades, will convey during his meeting with the new Turkish Cypriot leader, Ersin Tatar, on Tuesday, his strong political will for a positive response to the UNSG`s invitation for the resumption of the talks on the Cyprus problem, Government Spokesman, Kyriakos Koushos, said on Monday, expressing hope that the Turkish side will show the same political will.

In statements at the Presidential Palace, Koushos noted that Anastasiades had already a telephone conversation with Tatar, congratulated him on his selection as the new leader of the Turkish Cypriot community, and suggested to have an informal meeting to get to know each other.

The Spokesman added that the positions of the President of the Republic and the Greek Cypriot side are clear and have been reaffirmed many times. He recalled the meeting of November 25, 2019, in Berlin and the letter which President Anastasiades sent to the UNSG on October 19 by which he expressed his will to proceed to dialogue, adding that “we expect the resumption of the dialogue at the invitation of the UNSG, as he himself has said in his letter of response.”

“We hope that both Turkey and the Turkish Cyprot side will respond positively to the UNSG`s invitation and will show the same political will,” the Spokesman added.

Moreover he said that the President will put forward the issue of the fenced off city of Famagusta and the need to respect UN Security Council resolutions.

Koushos said that developments as regards the issue of Famagusta do not contribute to the creation of the appropriate climate for the resumption of the talks, noting that President Anastasiades hopes that the other side will show the political will to create a better climate in view of the UNSG`s expected initiative.

Responding to a question, Koushos recalled that the meeting on Tuesday will take place in the presense of the UNSG`s Special Representative in Cyprus, Elizabeth Spehar, adding that depending of the climate and the conditions that will prevail the UN will evaluate the situation and will continue to take action aiming at convening an informal five party meeting.

He noted that the initiative belongs to the UNSG who will decide how to handle the whole issue as regards the process and when he will convene the informal five party meeting.

Moreover, Koushos said that statements made by Tatar and Turkish officials, including the Turkish President himself, as regards the basis for a Cyprus settlement are not encouraging, do not contribute to the continuation of the talks from where they were suspended in Crans-Montana, and do not create a good climate.

He also recalled the continuing illegal activities of Turkey in Cyprus` EEZ, the Turkish activities in Famagusta and Turkey`s policy in general, not only in Cyprus but also as regards Greece, Syria, Libya, Iraq and Nagorno-Karabakh.

He noted that nevertheless “we remain firmly committed to the continuation of the talks, we have clear positions which we have repeatedly said.”

Koushos said that the settlement must be based and in line with the UN decisions, the UN Security Council resolutions, the convergences that have been achieved and the EU values and principles.

These will be conveyed once again and will be the clear position of the President of the Republic to the UNSG or his representatives, he said, adding that there is no other choice than to proceed to the talks.