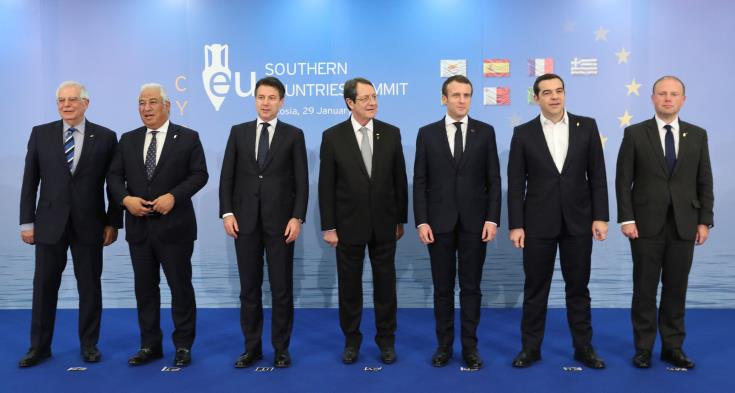 Cyprus President, Nicos Anastasiades, will have the opportunity to discuss about possible measures against the Turkish provocative actions in Cyprus’ Exclusive Economic Zone (EEZ) with his counterparts from the MED-7 group, namely France, Italy, Spain, Portugal, Greece and Malta, in the framework of the group’s Summit that will take place in Malta.

The EU28 are expected to discuss such measures during the European Council meeting that will be held in Brussels on 20-21 June.

In statements to the media on Saturday, Government Spokesman, Prodromos Prodromou, said that President Anastasiades will fly to Malta on 14 June to participate in the 6th Southern EU countries` Summit. Asked if the President will discuss and coordinate with the other leaders, ahead of the European Council, about the measures that could be taken by the EU, in view of Turkey’s provocative actions in the Cypriot EEZ, Prodromou said that there will certainly be an opportunity for such consultations.

The spokesman also noted that since Turkey has launched its latest illegal activities in the area, the Cypriot diplomatic service and the government have been holding contacts for coordination in the framework of the preparation for an EU reaction, which has in a way already been announced.

He recalled that both the European Commission and the European Council have said that this issue will be re-examined if Turkish provocations are not terminated.

Prodromou stressed the importance which Nicosia attaches to the 6th MED-7 Summit, recalling the previous one which took place in Nicosia “and was particularly successful” and noting that it offers an opportunity to continue deliberations and coordination, on the basis of joint interests, within the EU framework.

Invited to say which measures Nicosia will ask from the EU to take against the Turkish actions, Prodromou said that this will be the result of coordination, adding that “decisions will be taken collectively and therefore the way our partners view these issues is important.” What we are pursuing is the best that can be achieved, he added.

Invited to comment statements by Turkish President, Recep Tayyip Erdogan, that Turkey will send a second drillship in the Eastern Mediterranean, that will be escorted by military ships, Prodromou said that “unfortunately the provocative behaviour of Turkey and its arbitrary and illegal approach does not seem to be coming to a halt.”

As long as this behavior continues, we will be making efforts to make it clear at the international level that Turkey is behaving arbitrarily and illegally and to look into the possibility for decisions or certain measures at the EU level that will make Turkey stop behaving in this manner, he added.

Prodromou also said that Cyprus` efforts on this issue, in the framework of its multilevel foreign policy, are directed towards its EU partners, powerful countries as the US, the Russian Federation and China as well as other countries.

He stressed that as President Anastasiades has said, if Turkey does not listen to the messages sent to her from everywhere then certain measures need to be examined.

Prodromou also announced that President Anastasiades will head to Geneva on Sunday, June 9, to participate in the 108th Session of the International Labour Conference that will be attended by the UN Secretary General Antonio Guterres and dozens of heads of state or government from all over the world, including German Chancellor Angela Merkel and French President Emmanuel Macron.

The spokesman said that Anastasiades will hold a series of bilateral meetings with some of his counterparts, on the sideline of the Conference, adding that his discussions will focus on issues that concern Cyprus.