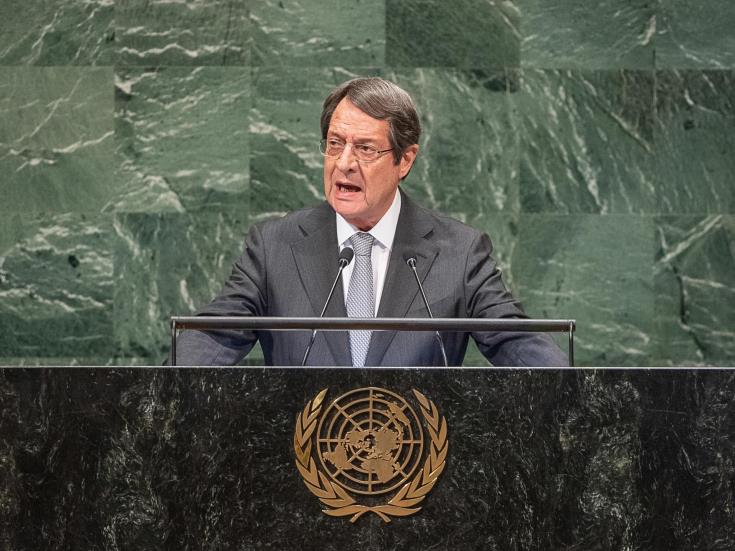 President Nicos Anastasiades returned early on Monday morning to Cyprus from New York, a day later than planned due to a technical issue that forced his aircraft to return to the United States three hours after take off.

President Anastasiades, who attended last week the UN General Assembly, in New York, was scheduled to return to Cyprus on Sunday. After returning to New York, a special flight was arranged to fly the President home with another aircraft.

Government Spokesman Prodromos Prodromou said that the cost of the special flight is borne by the company hired to arrange the transportation of the Cyprus delegation, as per the relevant contract. The company was chosen through a tender process, he added.

On the return flight President Anastasiades was accompanied by his wife Andri, Foreign Minister Nicos Christodoulides and Government Spokesman Prodromos Prodromou. The rest of the Cyprus delegation are expected to return to Cyprus on Tuesday.

Speaking to CNA, Prodromou also said that the issue of Varosha, the fenced-off part of Famagusta, may be brought up for discussion at the Security Council within the next days. Nicosia took recourse to the UN Security Council, in a bid to reaffirm resolutions 550 and 789 on Varosha, after Turkish actions and statements aiming to open the city for settlement, while questioning Greek Cypriot property ownership.

“All prior arrangements have been made, there is positive ground,” the Government Spokesman said.

He added that Nicosia aims at a declaration by the Security Council that will reaffirm existing resolutions on Famagusta and not at a new resolution.

Asked about the possibility of a trilateral meeting between the President of Cyprus Nicos Anastasiades, the UN Secretary-General Antonio and the Turkish Cypriot leader Mustafa Akinci, Prodromou said that Nicosia is ready for such a meeting, in order to conclude the terms of reference that will pave the way for the resumption of settlement talks. Nicosia expects to hear from Guterres on how to proceed, he added.

Prodromou also pointed to the common understanding reached by the leaders of the two communities, during their meeting on August 9. “What is left now is for Guterres to invite us in order to seal the deal, if there is common ground,” he noted.

Addressing last Thursday the UN General Assembly, President Anastasiades expressed his full dedication and support to the effort of the UN Secretary – General to resume the process for a Cyprus settlement from where it stopped in the summer of 2017 at Crans Montana. He also said that there is an understanding by the leaders of the two communities that the relevant “Terms of Reference” should comprise the Joint Declaration of 11 February, 2014, the convergences achieved that had led to holding the Conference on Cyprus at Crans Montana, and the six-point framework of the UN Secretary – General, as presented on June 30, 2017 at Crans Montana.

As for the possibility of convening an informal five-party meeting, Prodromou said that Nicosia is not negative, for the guarantor powers would also be called to discuss the international aspects of the Cyprus problem.

Nicosia is working together with the UN Secretary-General, who is the one to judge and decide how to proceed, Prodromou concluded.