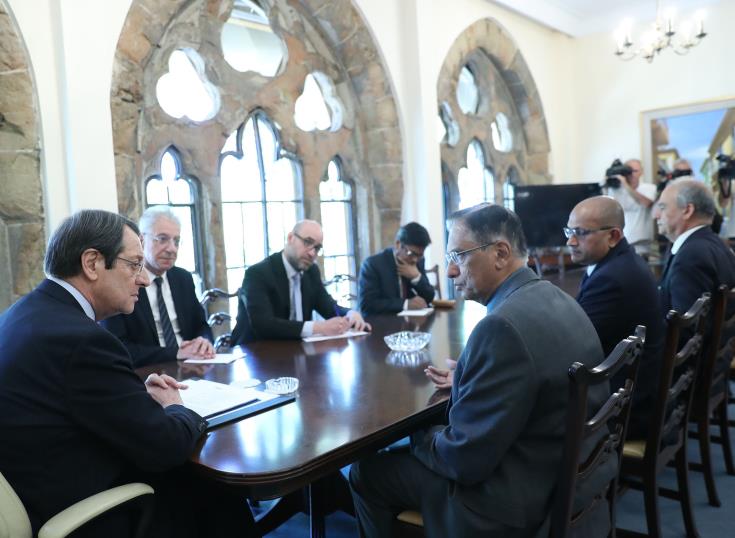 President Anastasiades conveyed his regret on Friday to diplomats of the home countries of female domestic workers after a 35 year old man allegedly confessed to killing seven, including two of the women’s young daughters since 2016.

During the meeting at the Presidential Palace, Anastasiades agreed to examine further suggestions brought forward by India’s High Commissioner, Dr Raghavan, as well as the general consuls of Sri Lanka, Vietnam, Philippines and Nepal.

The “President expressed regret of administration about recent unfortunate happenings”, said Dr Raghavan, adding that they were assured that his administration will take “every possible step to influence confidence in foreign nationals here, especially workers from Vietnam, Sri Lanka and Philippines and other nationals”.

He further told reporters that the diplomats gave suggestions which the President promised that will be discussed at length in the next few days, possibly on Monday and whatever action needs to be taken, will be taken.

Invited to elaborate on the suggestions given to the President, the High Commissioner said the various missions here should know how many of their nationals are here, especially working in domestic settings.

“Now we don’t have a clear idea so we suggested if there is better control whereby the missions of various countries get to know how many of their countries are here, how many work in domestic environment. There is a gap here that we pointed out to the President and the President was so positive that this gap should be fixed and the foreign workers here have another avenue to go,” he added.

Government Spokesman Prodromos Prodromou told reporters that the President conveyed his deep regret for the crimes and apologised on behalf of the state and the people of Cyprus to the representatives of the countries the victims come from. They also exchanged views on further improving the living conditions of workers from third countries in Cyprus.

Prodromou said it was significant that the diplomats acknowledge that this is an isolated event which does not correspond to the “very good conditions workers face in Cyprus” who also said they were satisfied with the cooperation they maintain with the Cyprus authorities.

He said that during the next cabinet meeting, the President of the Republic said, decisions will be taken which include giving the right to the Commissioner for Administration and Human Rights to handle cases concerning the living conditions and human rights of workers from third countries. Work related issues will continue to be handled by the competent Ministry, he added.

At the same time, the President announced that a meeting of Ministers responsible for third-country workers, with the High Commissioner and Consuls from these countries will take place to discuss suggestions that will further improve cooperation between Consular and Diplomatic authorities and Government services.

The Police has been criticized for not taking action to locate the women, even if their friends and relatives reported them as missing. Some have been missing since 2016.  The Justice Minister resigned on Thursday and the President dismissed today the chief of police.

By In Cyprus
Previous articleYouth stage silent climate protest; say they were denied right to protest outside Parliament (photos+video)
Next articleEuropean elections hopefuls submit their candidacies