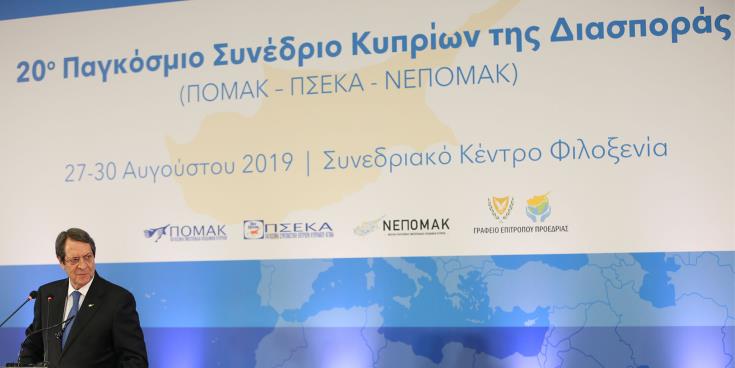 President Nicos Anastasiades said on Tuesday that he will not press forward with a Cyprus settlement that will cause insecurity to Greek Cypriots and assured that his effort is to provide for future generations.

Addressing the Conference, the President assured them that the effort of “a politician who finds himself on the exit course is not how to see his homeland run even more risks, but to see how to provide for future generations” and how to leave behind a safe country, guaranteeing peaceful coexistence.

“I have therefore no reason to refuse to enter into dialogue, or to deny the efforts that need to be made in order to counter the faits accomplis which are being recorded every year, unfortunately to the detriment of the Greek Cypriot side” he said.

The President of Cyprus called for unity and said that we need to finally realize that it is not the Greek Cypriots who don’t want a solution, but the attitude of a greater power with the “vision of a new Ottoman empire” that acts in a way that is not acceptable for Cyprus and for other countries.

Speaking about the way ahead, the President noted that it has become possible to have a meeting with the Turkish Cypriot leader, through the intense efforts of the Greek Cypriot side, in order to reflect about where we are finally heading to. He said that as a result of the August 9 meeting, the two sides appeared willing to encourage the UN Secretary-General and international players to act towards the resumption of settlement talks.

The President expressed hope that logic will prevail among those who provoke through illegal activities, not just Cyprus, but also other international players and violate international and European law.

He also hoped that in this endeavour, Cyprus will also receive assistance from all those who are really interested for peace, including from the EU and the UN.

Addressing earlier the same Conference, House President Demetris Syllouris said that Cyprus developments are not very encouraging, he expressed however hope that the recent meeting between the President of Cyprus and the Turkish Cypriot leader and the way ahead will bear fruit in line with their expectations. In the game Turkey is playing, Cyprus is not alone, but receives the backing of Greece, the EU and other friendly countries, he added.

Syllouris also referred to illegal Turkish activities within the exclusive economic zone of Cyprus, which, he said, are all part of Ankara’s effort to establish a zone of influence in the Eastern Mediterranean, in a bid to control the wider region, while using as a pretext the interests of Turkish Cypriots. The same holds true with regard to the plans of the occupation force to open the fenced-off part of Famagusta under Turkish administration as well as in relation to the request for the joint administration of natural resources that are located within Cyprus’ EEZ, he added.

Representing the Greek Prime Minister at the inaugural ceremony of the Conference, Diamataris said that Kyriakos Mitsotakis has strong feelings for Cyprus’ national cause and he’s well aware of the fact that for Hellenism there are no margins for retreats or losses.

Taking the floor, Presidential Commissioner Photis Photiou said that upgrading the already close ties with Greece and enhancing trilateral cooperation schemes on Diaspora matters with other countries occupy a prominent position among the activities of the National Strategy for the Diaspora.

Photiou said that after the bilateral and trilateral cooperation schemes with Israel, Armenia, Egypt, Serbia and Romania, preparations are underway to sign more memoranda of understanding with other countries, such as Ireland, Portugal, Lebanon and Italy.

From their part, representatives of the organizations of overseas Cypriots pledged to continue their work for the reunification of Cyprus and the termination of Turkish occupation.

PSEKA President Philip Christopher expressed hope that the Eastern Mediterranean Partnership will bring the USA closer to the Republic of Cyprus. “It is our hope that Israel and Greece and Cyprus will become the rock of a new foreign policy of the USA” he added.

POMAK President Andreas Papaevripides said that the international community should go beyond exhortations and undertake dynamic measures against Turkey for its provocative actions in Cyprus’ EEZ.

NEPOMAK President Christos Tuton welcomed the efforts of the President of Cyprus to resume talks and expressed hope for a positive outcome. A representative of the Archbishop of the Church of Cyprus also addressed the conference.