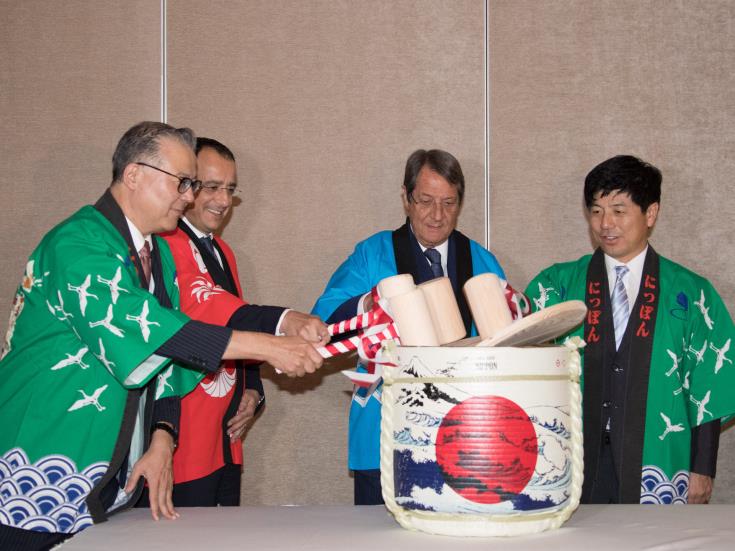 The opening of the Embassy of Japan in Nicosia marks a historic milestone in bilateral ties, President Nicos Anastasiades has said.

In an address on Monday evening during the opening of the Embassy in the presence of Japan’s State Minister of Foreign Affairs Kazuyuki Nakane, President Anastasiades pointed out that the relationship between the two countries is based on genuine friendship, shared values and interests, mutual respect and understanding and a joint resolve to further deepen our cooperation.

He also referred to the decision taken by the Government to open an Embassy in Tokyo, by the end of the year, saying that this is a sign of reciprocity and tangible proof of our desire to widen our partnership. The President also extended, through Minister Nakane, an invitation to Prime Minister Abe to hold a state visit to  Cyprus, a visit, he added, that will, without doubt, facilitate and accelerate the expansion of the bilateral relationship and cooperation.

In his address the President also underlined that the Memorandum of Cooperation between Cyprus and Japan on humanitarian issues, signed earlier between Minister Nakane and Cyprus FM Nicos Christodoulides, will be just the beginning of various agreements to follow between our two countries in the near future.

He expressed Cyprus’ gratitude for Japan’s traditional principled stance as regards the efforts to reach a comprehensive settlement on the basis of the aforementioned values and principles.

The President said that during a meeting he had earlier with Minister Nakane, he briefed him on UNSG Envoy’s visit on the island. President said that during the meeting with the Envoy, he reiterated that we remain strongly committed to engage in a new dialogue within the framework set by the Secretary-General, with the same determination and goodwill we have demonstrated since the beginning of the negotiating process.

“Within this context, I truly wish that both our Turkish Cypriots compatriots and Turkey will respond positively to the new prospect that is presented again upon us, taking into account in a comprehensive manner and, without being selective, the provisions set by the Secretary-General at the Conference in Crans-Montana,” he added.

He also said that during the meeting with Minister Nakane , they discussed the future prospects and the promising potential of our partnership and they  reaffirmed their commitment to encourage more high-level exchanges and visits between officials from both governments, as well as increase people-to-people contacts, with the aim to strengthen our collaborations, both bilaterally and on the international scene.

They also reaffirmed commitment to enhance the institutional framework of co-operation through exploring new areas of beneficial joint ventures, particularly in the areas of tourism, trade, investments, culture and merchant shipping.

President Anastasiades also said that Cyprus warmly welcomes the Economic Partnership Agreement signed last week between the EU and Japan, saying that this is an extremely important agreement, not only because it further institutionalizes EU – Japan relations, but also due to the fact that it constitutes a model of free, open and fair trade and investment rules, of which both Japan and the EU, including Cyprus, are to benefit from.