President fully satisfied with progress in relations between Cyprus and Israel 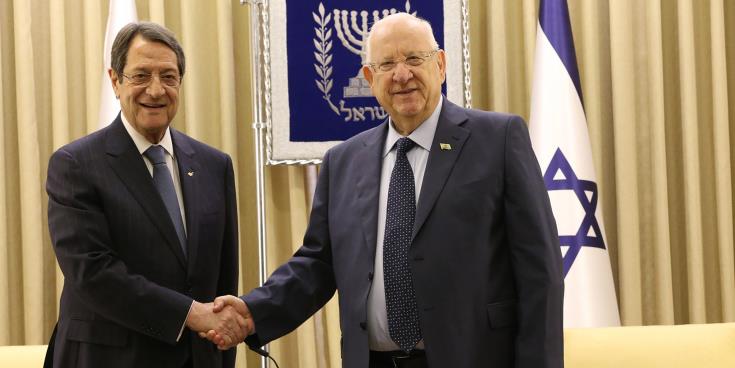 Cyprus President Nicos Anastasiades has described his meeting with his Israeli counterpart Reuven Rivlin in Jerusalem on Wednesday as excellent, while referring to the relations between Cyprus and Israel he said that he was fully satisfied with their progress.

“What we both underlined is the further reinforcement of these excellent relations,” Anastasiades noted, in statements to journalists, asked about his meeting with the President of Israel. He noted that “it was in every aspect an excellent meeting that  took place in a warm climate.”

According to a press release issued by the Cypriot Presidency, President Anastasiades said that he conveyed Cyprus’ sympathy with the victims of the Holocaust, noting that a ceremony will take place in Jerusalem on Thursday Israel to mark 75 years since Auschwitz liberation.

During the meeting the two leaders reaffirmed the close ties as well as the increasing cooperation between the two countries.

Welcoming President Anastasiades, Rivlin said “we are glad to have with us such good friends.  We are looking forward to further our cooperation in the field of energy to the benefit of the welfare of our people.”

The Israeli head of state also referred to the close cooperation between the two states not only in the field of tourism, but also in water management, agriculture, industry security and cybersecurity.

“We are very happy about the relationship we have and we can extend it. We are very close and we can do much better. It is a great honour that you are with us,,” he added.

On his part, Anastasiades said the two countries “have managed to build such strong ties, bearing in mind the strong bonds we have from the past,” adding that “2000 babies were born in Cyprus during the second world war when the Jews came to Cyprus.”

President Anastasiades further said “we share excellent relations and we are building up such a strong alliance facing all the challenges in the area, based always on international law, on the principles of democracy, of peace and security in the area.”

Referring to the trilateral and multilateral cooperation and the mechanisms set up for the benefit of the peoples of the participating countries as well as for peace, security, and stability in the region, the President said that “we are not excluding anyone, but what we are asking from those who would like to be in this block of friends for peace, security, and stability in the area, is for them to respect international law, human rights, the independence, and sovereign rights, and the dignity of any country.”

“I believe that what we are building up through the trilateral, through the multilateral cooperation and synergies is in the best interest of our peoples,” he added.

However, he pointed out that “some of our neighbours, unfortunately, without respect for international law have been trying to play a bigger role than they are entitled to. But I am sure that, at the very end, the law will prevail, logic will prevail, peace will prevail, and the need to be together, all of us in the area, will prevail, because it is in the interest of each one of the nations in the area.

President Anastasiades also held a meeting with the leader of the Israeli Blue and White Party leader Benny Gantz reaffirming the excellent relations between the two countries.

According to a press release issued by the Cypriot Presidency, during the meeting Gantz expressed his gratitude over Cyprus’ position against antisemitism as well his appreciation for Cyprus adoption of the IHRA definition on antisemitism.

By In Cyprus
Previous article
Mavroyiannis: Bridging gap between principles and actions key to UN credibility
Next article
China locks down city of 11 million at epicentre of virus outbreak