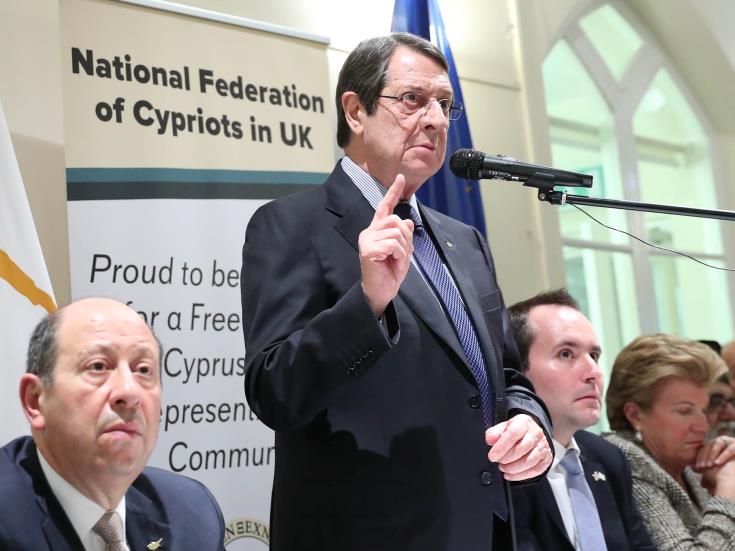 President Anastasiades on Sunday updated Cypriots in London on the efforts to resume talks, during the first day of his official visit to the British capital as a guest of the UK Government.

“Unfortunately, it is Turkey’s intransigence that did not allow reaching that settlement which would demonstrate to Greek Cypriots that it would be viable, that it would be functional, it could stand in time, that it could secure an independent and sovereign country, a country that would respect EU principles and values,” said President Anastasiades addressing the attendees of a dinner organised by the National Federation of Cypriots in the UK.

He assured them that, based on these principles, he is trying to find a way of creating the conditions that would allow Greek Cypriots to accept a settlement.

Referring more specifically to the efforts to resume settlement talks, he said that the Cypriot, Greek, British and European sides have met with the UNSG special envoy for Cyprus Jane Holl Lute three times. “We are waiting for the third meeting with Ankara to be finalised. A lot will depend on what will be said, but also on what the terms of reference will entail,” noted President Anastasiades.

He then stressed the significance of the content of the terms of reference, saying that it is important they are based on the terms discussed at the Crans Montana morning meeting of the 4th July 2017.

He criticised the fact that no official UN minutes of that meeting exist, adding however that “thankfully some people made sure detailed minutes have been kept.”

He again rejected as “unacceptable” the document regarding the terms of reference that was presented by the then UNSG special adviser Essen Barth Eide, speaking of positions that were “misrepresented”.

“In order for us to be able to move ahead, to be able to hope for a constructive dialogue, what is required is that the terms of reference not only determine the issues under discussion, but also what is acceptable and what is unacceptable. And we have agreed with the Turkish Cypriot leader in the past, and it is a principle that has been accepted by the UNSG, that one side’s security cannot constitute a threat for the other side,” added President Anastasiades.

He elaborated by saying that he could not accept the Turkish Cypriot community’s demands on political equality and effective participation, as their requirement for a positive vote by them on state decisions would mean they would “impose” on the Greek Cypriot community.

He noted that political equality and effective participation are accepted but to the extent where they would be “reasonable”, i.e. where a decision by the community with the larger population would negatively impact on the other community.

“If we consider, and I regret to say it, the dependence of the Turkish Cypriots from Ankara, then you realise that in the end it would not be them that decided, but the ones having the control,” commented President Anastasiades.

He went on to speak about the multidimentional foreign policy of Cyprus, with excellent relationships with all the big countries and with significant tripartite collaborations, which are turning into quadripartite, as is the case with the US Foreign Secretary attending the Cyprus-Greece-Israel meeting in a few weeks’ time.

He made special reference to the delivery of the country’s energy programme “despite the threats from Turkey”, which contributes to the message that “Cyprus is both a reliable partner and a pillar of stability in the region.”

The President concluded his speech by referring to the reforms which aim to modernise the Cypriot state and have helped turn the economic situation round following the 2013 crisis.

He also expressed his and the country’s gratitude and thanks to the Cypriots of the diaspora for their help and support in all these.

The President of the Federation Christos Karaolis said in his introductory remarks: “We are determined that the Turkish occupation of Cyprus will not need to transcend to any further generations, but for as long as it does, we will continue to do our utmost to achieve a solution that is viable; secures the withdrawal of the Turkish troops and setters; ends the anachronistic system of guarantees and respects the human rights of all Cypriots, reuniting our beloved island, so that Greek Cypriots, Turkish Cypriots, Maronites, Armenians and Latins, can live and prosper together. Our Federation unites the community and its leaders, of all political parties and no political party, by identifying the common ground and uniting efforts. In doing so, we visibly demonstrate that on the Cyprus issue, there are no parties, no personal interests and no divisions. We have one party, and that is Cyprus.

By In Cyprus
Previous articleBank of Cyprus: 2018 losses of €104m, capital of 18.3%
Next articleGreek bond yields hit 12-year low on Moody’s ratings boost