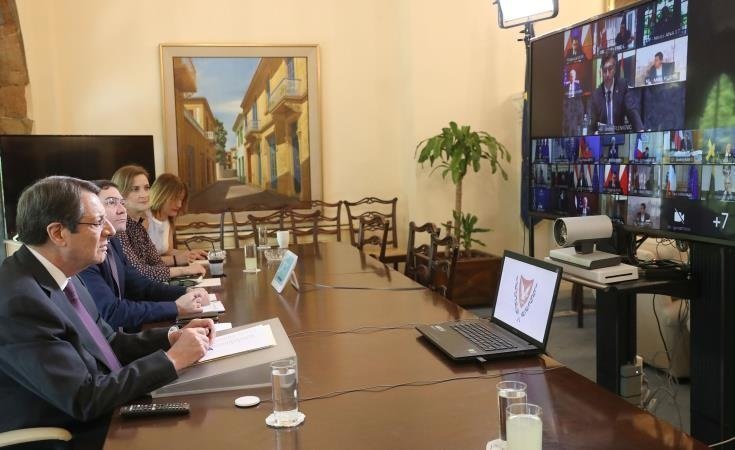 President Nicos Anastasiades underlined on Friday the need for a timely adoption of the new EU budget, during a teleconference with European counterparts, in the framework of the European Council. He referred to the major challenges the Cypriot economy is facing during this period, and called for further EU support, making particular reference to the tourism and services sectors.

According to a written statement by government spokesman, Kyriacos Koushos, the discussion focused mainly ον the European Commission proposal for the new Multi-annual Financial Framework for 2021-2027, which includes the proposed Recovery Plan to support the economies of member states to deal with the aftermath of the pandemic.

Participants discussed issues, such as the total budget, the allocation of funds per sectoral policy, funding of EU priorities as well as the timeframe for negotiations, which has changed due to the coronavirus pandemic, it is added.

In his intervention at the Summit, President Anastasiades thanked the European Commission for its proposal and expressed his conviction for the positive outcome of negotiations, while underlining the need for the timely adoption of the new budget.

“He noted that the final agreement must first and foremost meet the expectations of all European citizens and provide the EU with the ability to effectively deal with all ongoing and future challenges, while underlining the need to show solidarity in particular with the member states that have been hit the most from this unprecedented public health emergency,” it is added.

The President of Cyprus presented once more the positions and demands of the Republic of Cyprus, by detailing the country’s particularities as an EU island country, and its connectivity problems , the announcement says.

Moreover, President Anastasiades referred to the major challenges the Cypriot economy is currently facing, as well as to the need for further EU support, since key sectors, such as tourism and services, have been badly hit due to the pandemic.

By In Cyprus
Previous articleGovernment sets out rules for vessel crews, other arrivals
Next articleTwo years jail for assisting illegal entry to Cyprus