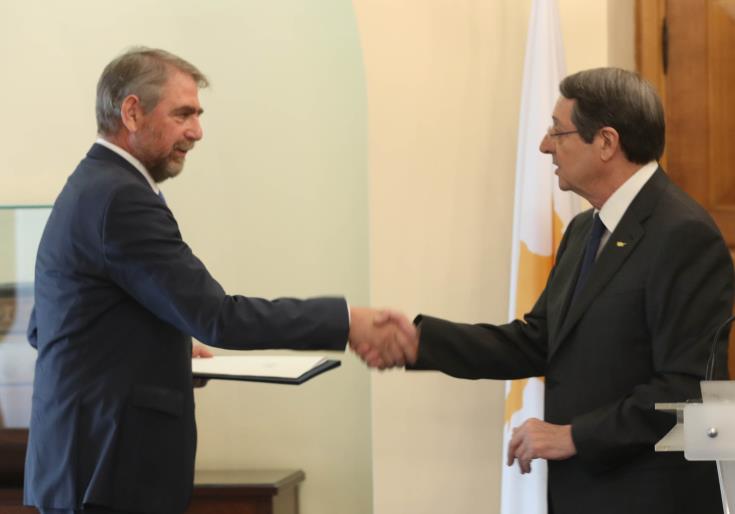 President Anastasiades has appealed for information on missing persons whose place of rest may be located within the areas controlled by the Republic of Cyprus stressing that such information can be given to him personally and under condition of anonymity.

At the same time, he expressed the hope that the Turkish Cypriot side will have the same constructive position.

President Anastasiades was speaking during the appointment ceremony of the new Greek Cypriot member of the Committee on Missing Persons Leonidas Pantelides and he referred to Ambassador Pantelides’ extensive experience with the humanitarian issue of the missing persons during his years at the Ministry of Foreign Affairs and the diplomatic corps in general, as well as the longstanding good relations he has with organised associations on missing persons.

He reiterated the government’s full commitment in finding out what became of each and every missing person in Cyprus.

This matter, he assured, is the first we raise to the Turkish Cypriot leadership as well as in meetings with the UN Secretary General, representatives of international organisations and foreign governments.

He referred to factors which make the work of CMP more difficult such as the long period of time which has passed, the small number of witnesses and their refusal to cooperate in most cases as well as the urban development which has occurred on top of possible sites where the remains of missing persons may be located.

He appealed once more “to anyone who has information on missing persons located in the areas under the control of the Republic, to give their information to me, so that they won’t have to worry.”

He urged anyone who has such information to “give the information to me personally,” adding that “I will not reveal my sources, in order to deal with a problem which concerns Turkish Cypriot missing persons.”

“I hope that the other side will have the same constructive approach,” he noted.

He urged Turkey to conform with the legal and moral obligation it has on the basis of international law and to cooperate for the effective investigation of the fate of missing persons.

President Anastasiades further assured that the government will continue to raise the matter and demand by the UN and the international community in general to exert the necessary pressure to the Turkish occupying force so that it may allow access to its army’s archives and in order for the CMP to make additional exhumations in military zones where missing persons remains are buried.

He stressed that such access could be perhaps the most important Confidence Building Measure and he posed the question “in what way it could be damaging to Turkey to behave in a humane way 45 years later?”

On his part, Pantelides said that in the short time he has been at the CMP he has realized how generously the state has invested in supporting the effort adding that a remarkable infrastructure is in place together with a scientific and research team dedicated to their work. He said he has identified some internal weaknesses and a number of external obstacles which reduce the effectiveness of the effort, adding that he considers it as his main responsibility to deal with these challenges.

He assured the President that he undertakes this mission, aiming to end as soon as possible the suffering of relatives of missing persons.

By In Cyprus
Previous articleIndependent probe into police’s handling of murdered women’s disappearances
Next articleEXPLAINER-How U.S.-China talks differ from any other trade deal