President Anastasiades: We are closely following events in occupied areas 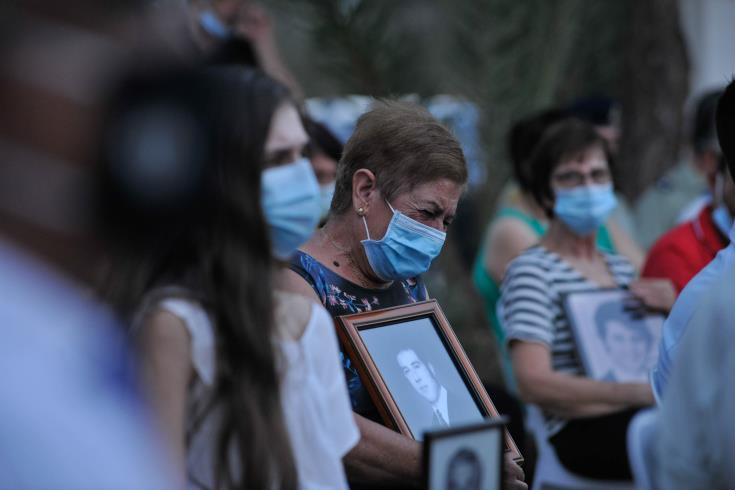 The government is closely following the events in the Turkish occupied areas of the Republic and is informing the EU, UN and the USA on Turkish threats and demands, said President Nicos Anastasiades.

At the same time, he expressed hope that the worst will be avoided.

In an address at the Missing Persons Memorial site at Kornos village, on Monday, the President said that his presence shows that he totally identifies with the human drama and pain the relatives of the missing persons go through on a daily basis.

He described the missing persons’ issue “an abominable war crime” that has continued for 47 years now. Once again, he added, we underline our firm commitment to finding effective ways to solve once and for all the drama, adding the families’ struggle “gives us answers to continue the effort to find answers to their justified demand to find out the fate of their loved ones”.

The President also pledged his support to the CMP’s work which resulted with the location and identification of a specific number of missing persons. However, he said the investigation of a large number of missing persons and failure to achieve substantial progress, is due to the occupation force’s refusal to cooperate and provide the information it maintains in its archives.

President Anastasiades appealed once again to anyone who has information that could help locate any missing person to provide it with complete anonymity.

“We demand that the UN and the international community finally exert the necessary pressure on the occupation force to conform with the legal and moral obligation, as provided by international law, and finally cooperate for an effective investigation into the fate of the missing persons”, he said.

Involvement in efforts for the missing persons will contribute in creating a positive climate that will help efforts to resume substantial negotiations for a Cyprus settlement, the President added.

He assured the relatives of the missing persons that we are working, just like we did at Crans Montana and doing everything humanly possible to find a solution.

Turkey, said President Anastasiades, wants to maintain the system of guarantees, create a military zone and have a positive vote for all central government decisions, so that essentially, all decisions of the state of Cyprus to depend on the will of Turkey and its representatives on the island.

Through intervention, they have managed to secure the election of a man who is known to work in favour of Turkey’s interests, disregarding the interests of the Turkish Cypriots, a man who welcomed on Monday Turkish President Tayip Erdogan and both made provocative statements, unacceptable demands and even threats.

Our effort is to create a functional and viable state, that will be fully in line with European principles and where citizens can secure their human rights and give answers to the questions you have to help ascertain the fate of the missing persons, said President Anastasiades.

I want to assure you that we will continue considering the missing persons issue as an integral part of a solution to the Cyprus problem, the President concluded.

Since the Turkish invasion of 1974, the fate of hundreds of people remains unknown. A Committee on Missing Persons has been established, upon agreement between the leaders of the two communities, with the scope of exhuming, identifying and returning to their relatives the remains of 492 Turkish Cypriots and 1,510 Greek Cypriots, who went missing during the inter-communal fighting of 1963-1964 and in 1974. So far, the remains of 722 Greek Cypriots and 284 Turkish Cypriots were returned to their families. Since the start of the year, until May 2021, the remains of 12 individuals were identified and remains belonging to 6 people were exhumed in various excavations.