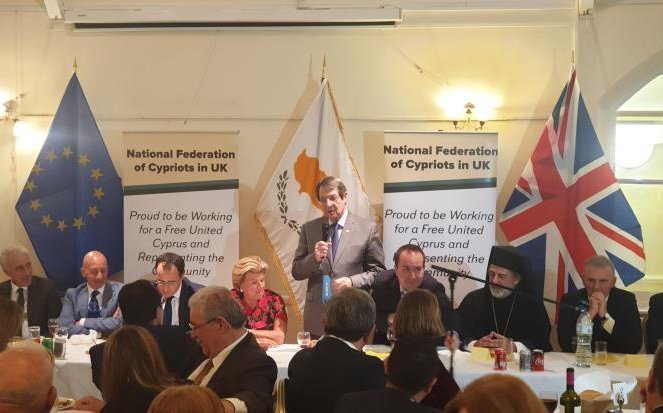 Cyprus President Nicos Anastasiades said he proceeds to the meeting with the UN Secretary General with a clear view on the prospects of the resumption of the UN- brokered talks over a Cyprus settlement, but added he is equally determined not to engage in talks under “gunboat threats.”

“As determined as I am to enter a sincere and creative dialogue, I am equally determined not to engage in talks while Turkey continues its illegal actions, violating international law or threatening to settle Famagusta,” Anastasiades told a gathering of the National Federation of Cypriots in the UK in a stopover in London on his way to New York to attend the UN General Assembly.

“I am glad to state that this is the unanimous position of all political forces (in Cyprus). One cannot negotiate under gunboat threats, under the threat of new fait accompli,” the President added.

Anastasiades focused on the “inadmissible demands” of the Turkish side to combine political equality with effective participation, implying a rotating presidency and a positive Turkish Cypriot vote for every decision either in the cabinet or every institution in a reunited Cyprus and the demand that new ideas over a Cyprus settlement should be submitted irrespective of the final outcome of the efforts to bring about a solution to the Cyprus problem.

This, he added, resulted in the failure of the UN Chief’s envoy to secure an agreement over the terms of reference that would pave the way for the resumption of the UN talks.

Anastasiades also referred to the meeting between Antonio Guterres and Mevlut Cavusoglu, the Turkish Foreign Minister, in New York, expressing hope the Turkish official did not insist on the preconditions set by Turkey to agree on the terms of reference.

He also wondered how could the necessary trust between the two communities in Cyprus be restored “under such provocations, such violations of the international law and such disregard of the UN Charter and the EU acquis.”

Referring to his upcoming contacts in New York such as the meeting with the representatives of the five permanent Security Council member-states, Anastasiades said he will convey his determination for a new start which would enable the creation of peaceful coexistence and a functional and viable state.
However, the President noted that conditions which undermine the efforts to build a functional and viable state or provide the right to a third country on how Cyprus will be governed are “unacceptable and inconceivable.”

“We acknowledge and accept political equality, what we reject is political inequality. Because what Turkey demands through a positive vote for the Turkish Cypriots on all issues, is nothing but a right to a veto,” Anastasiades added, recalling that he has repeatedly asked his interlocutors to present one such example “where one community has such rights that enable it to determine the fate of the other.”

“Our aim is a dialogue which could deliver functionality, viability, mutual respect and peaceful coexistence,” the President added.

He also noted that during his address to the UN General Assembly he will deplore Turkey’s illegal actions, that violate international law.

Cyprus has been divided since 1974 when Turkey invaded occupying its northern third. The last UN-backed talks held in the Swiss resort of Crans Montana ended inconclusively in July 2017. Anastasiades’ meeting with the UN Chief comes as his special envoy Jane Holl Lute failed to broker an agreement between the two sides over the terms of reference, the parametres under which a fresh round of talks could begin, while Ankara has dispatched drill ships for illegal drillings in Cypriot territorial waters.