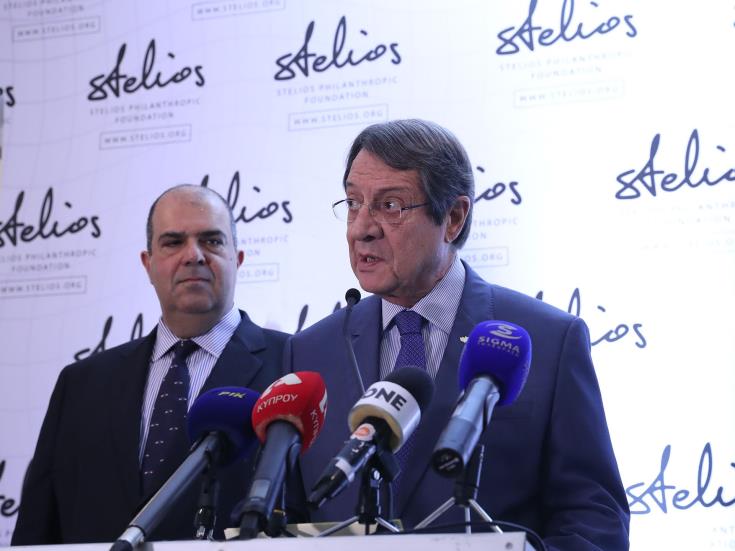 President Nicos Anastasiades expressed his commitment in supporting bi-communal initiatives which support the efforts aimed at reaching a comprehensive settlement.

Addressing the Stelios Bi-Communal Awards 2018 at the foundation’s premises, President Anastasiades praised the winning teams for their efforts to promoting creative bi-communal interaction and co-operation, with the aim of achieving lasting peace on the island.

The President also expressed appreciation to Sir Stelios Hadjioannou, founder of Stelios Philanthropic Foundation, for his initiative to launch and hold these annual awards in Cyprus.

President Anastasiades said that the awards, held for the tenth consecutive year, demonstrate the way in which Greek Cypriots and Turkish Cypriots can successfully work together towards a common purpose and a shared vision, as well as the willingness of both communities to enhance their socio-economic bonds.

Indicative of its success and of the will of Greek and Turkish Cypriots to jointly collaborate together and to build together their common future is the fact that this year nearly 700 applications were submitted, out of which, 50 are rewarded this evening.

President Anastasiades said that as we honour the core values and principles which all the participating bi-communal teams exemplify, he noted that his presence at the ceremony “sends a clear message that the Republic of Cyprus remains sincerely committed in supporting such bi-communal initiatives which support our efforts aimed at reaching a comprehensive settlement that will end the unacceptable status quo and reunite the country, its people, the economy and institutions”.

Referring to the Cyprus issue, President Anastasiades said that as he had stated while addressing the UN General Assembly in New York last week, he is concerned of the consequences of the peace process remaining at an impasse.

He reiterated “our clear position: Our side remains ready for the immediate resumption of the negotiating process based on the UN resolutions, the principles of the European Union, the convergences achieved so far, as well as the framework of the six parameters set by the UN Secretary General himself in Crans-Montana”.

Our vision, he added, “remains none other than to reach a viable and functional settlement that will reunite Cyprus in a truly independent State, free of any foreign dependencies, allowing all Cypriots to live in a normal state and work together for the prosperity and security of all”.

A settlement, he said, “which will create a win-win situation for all Cypriots, address the expectations, sensitivities and concerns of both communities and ensure mutual respect, peaceful co-existence and prosperous collaboration between all of its citizens, irrespective of their different ethnic, cultural and religious diversity”.

In his remarks, Sir Stelios said this year is not the high watermark as it was last year where there were about 800 applicants, this year, “we had 700 applications which I think is a very good respectable result”.

Even though he was a little pessimistic when they started this year, Sir Stelios praised the fact that the number of applications shows that Greek Cypriots and Turkish Cypriots care, cooperate, even in a difficult year, post Crans Montana. He added “we are here for the long run”.

According to a press release, this year, nearly 700 Greek-Cypriots and Turkish-Cypriots collaborated and submitted their applications for Stelios Bi-Communal Awards 2018, to win one of the 50 cash prizes that are offered by Stelios Philanthropic Foundation. Since 2009, the total value of the awards that were granted to bi-communal collaborations adds up to €3,250.000.

The aim of Sir Stelios’ philanthropic act for the past ten years, is to encourage cooperation between the members of the two communities in Cyprus and to establish lasting peace on the island.