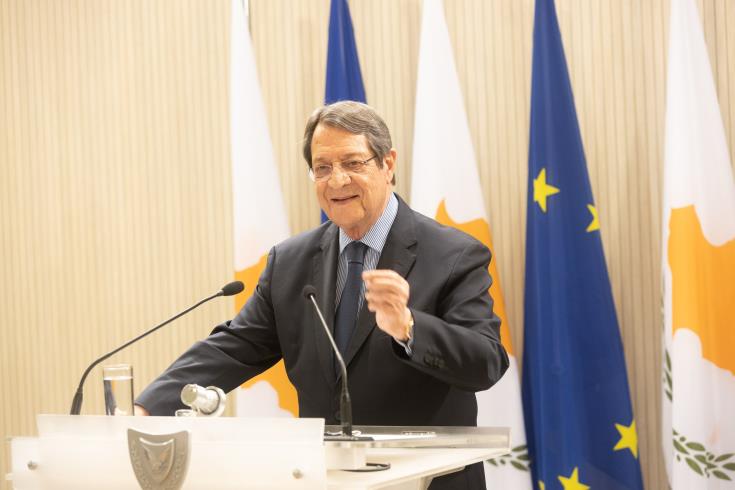 At the outset, I wish to thank President Tusk and the members of the Christen-Democratisch Appèl for your kind invitation and warm hospitality. It is certainly with great pleasure that I join you at this year’s EPP Congress in Rotterdam.

I would be remiss had I not started by expressing my deep appreciation and thankfulness to my good friend, Donald Tusk, whose term in office as President of the EPP has come to an end.

A great European statesman, whose vision for a strong and prosperous Europe remained at the heart of his efforts to promote our values and interests and safeguard what we historically stand for.

Despite the huge challenges, he never lost sight of our urgent priorities and led the EPP to numerous achievements.

I would like to take a moment to personally thank Donald for his friendship, but also genuine support to my country all these years, and wish him every success in his future endeavours, as he now returns back to Polish politics.

These said, the Rotterdam Congress marks the beginning of a new and promising era for our political family, with Manfred Weber at the helm of the EPP, whose impressive credentials are known to everybody.

You have my warmest congratulations on your election yesterday and my assurance that you will enjoy our strong support throughout your tenure.

The tasks you will face appear overwhelming. You assume the leadership of the EPP at a watershed moment for the EU. But your integrity and extensive experience have proven that you are a man who has the vision to defend our values, provide solutions to the European citizens and all-in-all bring success to the European project.

I cannot but start with the greatest challenge our continent has faced in decades, namely the Russian invasion in Ukraine, which forms new global geopolitical dynamics.

The Russian aggression in Ukraine has entered its fourth month and the latest concerted attacks on the Donbass industrial basin, including the Russian onslaught against populated areas in Donetsk and Luhansk, indicate that we have not seen the end of it.

These war images do not belong to our continent in this time and age. We have built our Union on the strong fundaments of democracy, inviolability of borders and respect of the territorial integrity and sovereignty. These are our principles, and we should apply them without discrimination.

We stand firmly by Ukraine and its people. And we will continue to do so for as long as it takes.

On Monday evening, we did finally manage to reach an agreement on the sixth package.

Our sanctions, which target elites in support of the war, impose a ban on most of Russian oil imports to the European market, disconnecting more banks from the global SWIFT system, etc, remain an important political tool to apply pressure on Russia, so as to cease hostilities, withdraw its military from Ukraine and respect Ukraine’s sovereignty and territorial integrity.

In this respect, allow me to raise two points:

First, I would like to reiterate the need to ensure the universal application of our sanctions, otherwise they might as well be ill-fated.

Regrettably, our joint efforts are hampered by partner countries, which provide Russia with “sanctions circumventing abilities”. This not only dilutes the sanctions’ intended effect, but also calls into question our unity, and allows third countries – of which some pretend to be allies to profit from the suffering of the Ukrainian people.

Second, we see that the sanctions imposed so far, have started having an impact on Russia. But we must not be oblivious to the fact that these same sanctions have started biting at home too. We knew there would be a cost, which we were ready to shoulder, given what is at stake.

What we should be cautious about, as we examine additional measures, is that the impact of sanctions does not become greater on us rather than on Russia. Our citizens have not yet had a respite from the pandemic, and the persistent inflation we already witness will inevitably have adverse effects on our domestic political landscape and economic structure.

In parallel to our resolute humanitarian, material, financial and political support to Ukraine, we need to remain focused on diplomatic efforts to stop the Russian assault. Such efforts should also echo the will of the Ukrainian Government.

The “Ukrainian wound” in the heart of Europe has painful echoes from Cyprus’ own experience.

The Cyprus and Ukrainian questions are both European problems. And we know very well that we cannot build the Europe that we want and deserve, if we do not put an end to these revisionisms.

As the President of a country that has been divided for 48 years, I think I am well-placed to say this; the security architecture of Europe and the sense of security we can offer to our citizens, is the most pressing issue for every single one of us.

We need this support to continue for the sake of peace, and I am confident that, with Manfred Weber, a firm adherent of greater EU engagement in Cyprus in general, this will be the case.

I would have been amiss, had I not expressed my gratitude to our EPP partners for supporting our efforts to reunify our country throughout the years.

I also wish to express my appreciation for the Resolution we have just adopted on “Recent Developments in the Cyprus Problem”.

I have no doubt that under your leadership the EPP will find the way to address challenges, as the war in Ukraine, the occupation of Cyprus, the need to stabilize the global economy, including the rise in energy prices and inflation, climate change, digitalization, migration, rule of law, social inclusion and many more.

Both have shown perseverance and strong commitment to the European ideals and the task of bringing Europe closer to its citizens, and particularly the youth.

In them, our political family is in a good position to do again what has done successfully in the past: lead Europe out of crises. And we must see the silver lining in these trying times; we have a rare opportunity to develop a better inter-institutional dialogue within the EU.

Let me close with this. I have already talked about the challenge ahead of us in Europe and the rest of the world. But with the EPP’s tireless work at all levels, and the togetherness which traditionally characterizes us, I am confident we can meet them successfully.

Thank you for your attention.