Photiou highlights role of Cyprus, Greece and Egypt while discussing preparations of “Nostos” in Athens 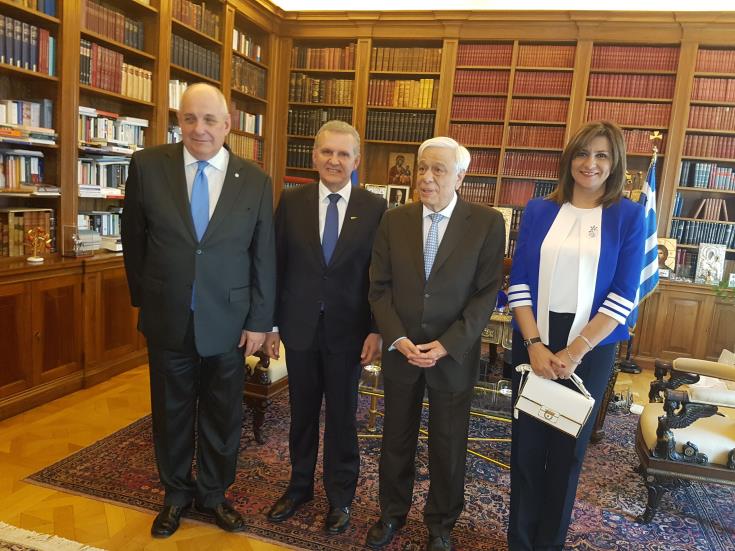 “Greece, Egypt and Cyprus are beacons of stability in the region,” Presidential Commissioner Photis Photiou said today after a meeting in Athens with his counterparts, aiming to coordinate action ahead of the “Nostos, the return” programme, to be held later this month in the Egyptian port city of Alexandria.

The programme, involving former residents of Egypt, of Greek and Greek Cypriot descent, will be officially inaugurated on May 1st by the President of Cyprus, Greece and Egypt, at a ceremony in the Library of Alexandria.

Photiou met Thursday in the Greek capital with Greek Deputy Foreign Minister Terence Quick and Egypt’s Minister of Immigration and Egyptian Expatriate Affairs Nabila Makram and sent a message of cooperation to the diaspora of the three countries, highlighting the importance of culture in this endeavour.

The three officials also visited the Acropolis, with Photiou saying that all three countries join forces in diaspora affairs, in order to advance their national interests. “Our diaspora is a powerful tool that one needs to handle properly” he added.

The event in Alexandria, he went on, sends multiple historic and political messages throughout the region, while noting that cooperation is at a very high level, aiming to serve people and peace in the region.

In a reference to “cultural diplomacy” Quick said on his part that culture is the element binding people from the region together and referred to the ancient Greek and Egyptian civilizations. Makram also highlighted the importance of protecting culture, especially through actions targeting the diaspora.

The three officials met later at the Foreign Ministry to discuss Nostos’ preparations. Between April 30 and May 6, 2018, the Egyptian government will host a group of former Egypt residents of Greek and Greek Cypriot origin, paying a visit to various sites in Alexandria, Cairo, El Alamein, Saint Catherine`s Monastery and Sharm El Sheikh.

Photiou, Quick and Makram also discussed their next steps in promoting diaspora-related actions.

During their meeting, they decided to extend “Nostos” to other countries where their diaspora is present, starting from New York in September. Moreover, they decided to give emphasis to the new generations of overseas Cypriots, Greeks and Egyptians with joint visits to the three countries next August.

After their meeting, the three officials were received by the President of the Hellenic Republic, Prokopis Pavlopoulos.

Concluding today’s round of meetings, Photiou stated that recent developments in the region make it imperative to strengthen relations and cooperation among neighboring countries. The festivities in Alexandria, in the framework of “Nostos” are just the beginning of a closer cooperation between the three countries, he added.

Photiou continues his contacts with organizations of Overseas Cypriots and relatives of missing persons in Athens. On Friday he is expected to meet with Alternate Minister of National Defence Fotis Kouvelis and Deputy Minister of Foreign Affairs Ioannis Amanatidis.

By In Cyprus
Previous article
Extreme Park
Next article
Things are going smoothly, Spehar says ahead of leaders’ meeting