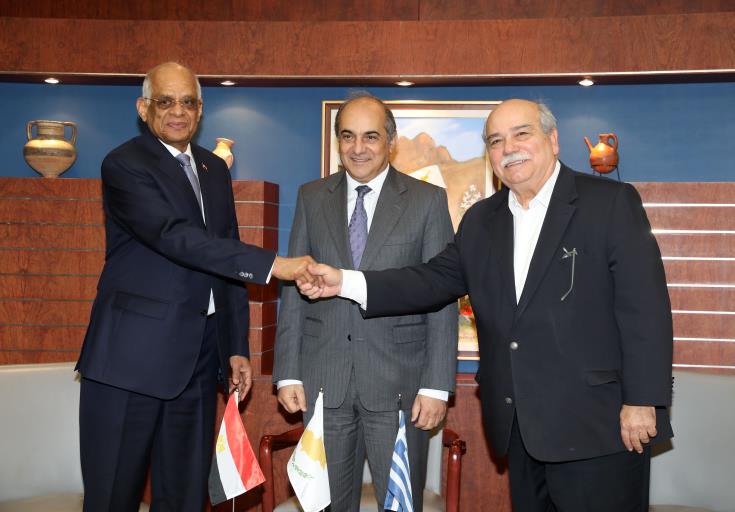 A parliamentary trilateral meeting, at the highest level, between Cyprus, Greece and Egypt is underway for the first time, in Nicosia, with Speakers of the Houses of Representatives sending messages of peace, stability and cooperation in the Eastern Mediterranean region.

In an introductory statement, House of Representatives President Demetris Syllouris said that this first trilateral meeting “conveys a concrete political message: Our will to work together to the benefit of our countries and our peoples and to the benefit of peace, stability and prosperity in our troubled region.”

Enhancing the cooperation between our parliaments which act as links between governments and citizens, serves the goals set in the context of the six trilateral summits which have taken place so far, he added.

It is a cooperation, “without exclusions, based on a common vision, of peaceful coexistence, good neigbourhood relations, international law principles, mutual respect and cooperation for the prosperity of people in the region,” he said.

Syllouris also referred to two initiatives by the House of Representatives, one for the establishment of a Middle East Cooperation Centre for the exchange of experiences and best practices between parliaments, researchers, academics, businesses and NGOs, as well as the introduction of teaching the Arabic language in Cypriot schools.

Referring to the Cyprus problem and Turkey’s provocations within Cyprus’ EEZ he expressed the Cypriot people’s sincere thanks to his Greek and Egyptian counterparts for their countries’ support.

On his part, President of the Hellenic Parliament Nikolaos Voutsis spoke of the goal served by trilateral cooperation mechanisms developed by Cyprus, Greece and other countries of the Eastern Mediterranean which is to promote “peace, stability and growth.”

In this context, he noted, “the cooperation between Athens, Cairo and Nicosia is one of the most advanced, in context of its progress both on a qualitative and a quantitative level, through the common initiatives and programmes launched.”

“The participation of parliaments enriches the dialogue and synergies and showcases inter-parliamentary cooperation and brings our peoples closer,” he said.

Our first meeting in Nicosia, he pointed out, “is the start and the opportunity to nurture this relationship and to contribute to the further progress of the trilateral mechanism between Greece, Cyprus and Egypt.”

Referring to the ratification recently by the Hellenic Parliament of the Prespes Agreement, Voutsis said that the Greek Parliament “gave an example at an international scale of a bold and consistent defence of national interests in contrast to a culture and policy of inertia, introversion and scaremongering in international relations.”

On his part, Egypt’s House of Representatives Ali Abdel Aal said the meeting conveys a message “to all countries who try to prevent Eastern Mediterranean countries from exploiting natural wealth in the Mediterranean, be it natural gas or other forms of natural wealth, which is huge.”

According to Aal the meeting is of “particular importance, since in reality it is the founding meeting of a trilateral cooperation mechanism between the parliaments of Egypt, Cyprus and Greece.”

He expressed his conviction that it will “contribute positively” in the trilateral cooperation of the three countries and referred to the fact that already six trilateral summits have taken place.

He said that parliamentary cooperation will be enhanced and successful, expressing the view that it will become an example for others to follow.

By In Cyprus
Previous articleThousands of dogs vie for “Best in Show” at NY Westminster contest (pictures)
Next articleOccupied north: Imports from Turkey increased, exports to Turkey decreased