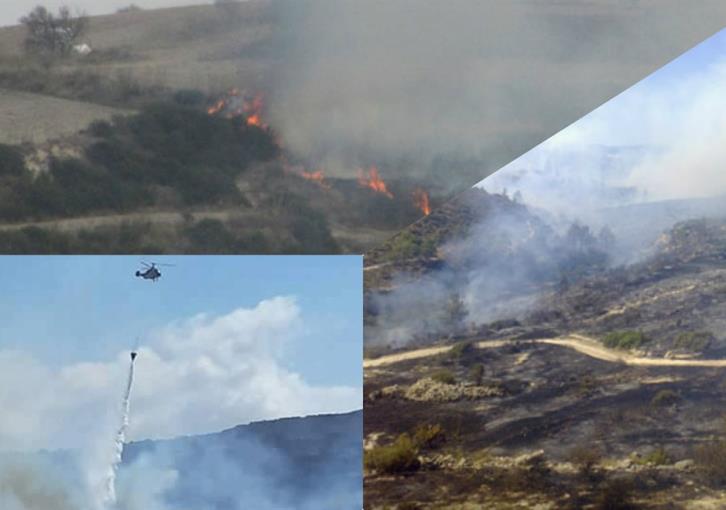 A fire that broke out early this morning near the Paphos community of Archimandrita and spread on a 20 kilometre front near the villages of Kouklia and Mousere in Paphos and Dora in Limassol, was still raging, having destroyed five square kilometres of forested area and dry shrubbery.

2 kilometres lie within the Oreites state forest, a front that is still burning out of control. It keeps rekindling due to strong winds.

Agriculture minister Costas Kadis rushed to the scene of the blaze.

Dozens of firefighters in more than thirty vehicles and supported by 9 planes and helicopters are battling to control it, as it extends on more than 7 different areas.

‘It’s a destruction of biblical proportions’, said head of Kouklia community Michalis Nikolaou, describing how all relevant services from the forestry department to the fire service and locals rushed at the scene since the early hours to assist in the fire fighting effort.

He said that the fire had started from an arsonist who set fire to reeds on the Mandria dry river bed, with flames spreading to Archimandrita, along the Kouklia, Oreites and Mousere road.

Nikolaou added that from a vantage point the burnt out land resembles a bombed out area. Luckily, he said, the wind energy park was spared.

Forested gorges of pine and wild shrubbery have been destroyed. ‘The flora and fauna are gone’, he said, adding that a firefighting strip cannot, unfortunately, prevent such incidents.

By Constantinos Tsintas
Previous articleBrazil COVID-19 deaths reach 100,000 and barrel onward
Next article82 year old killed in Paphos while trying to move his car off the pavement-victim named