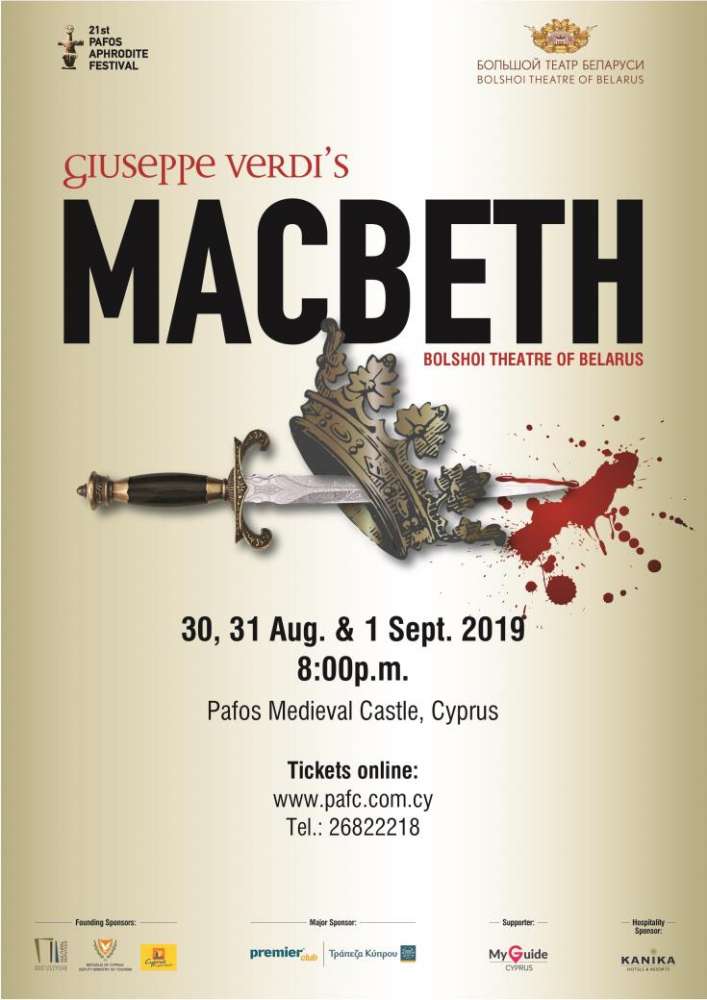 Giuseppe Verdi’s masterpiece Macbeth was chosen for the 21st Paphos Aphrodite Festival, as the event enters its second decade in Cyprus’ cultural life. The production by the Bolshoi Theatre of Belarus will be presented on August 30, 31 and September 1, 2019, at the Paphos Mediaeval Castle.

The details of the opera production were presented on Tuesday, during a press conference in Nicosia. Paphos Aphrodite Festival Cyprus Board President and Paphos Mayor Phedonas Phedonos noted the institution’s 21 year-long creative presence, reserving a place at the epicentre of the island’s  cultural developments.

He added that it was not easy to attain the festival’s consolidation and recognition, as the opera was never considered among the popular forms of art in our island and never secured a critical mass of spectators that could sustain this kind of events.

He said, moreover, that the event continues its long path uninterrupted, having survived even during the difficult years of the financial crisis, proving thus that Paphos Aphrodite Festival has still a role to play.

Education and Culture Minister Costas Hambiaouris said that Paphos Aphrodite Festival is considered as the greatest annual cultural event in Cyprus, with international recognition. In the past 21 years, he went on, the festival contributed in strengthening the flow of cultural tourism to Cyprus, forming an eclectic audience and presenting unforgettable productions.

Τhe dramatic opera Macbeth (Macbetto) by Giuseppe Verdi, based on William Shakespeare`s  drama, consists of four acts with an Italian libretto by Francesco Maria Piave. It premiered on 14 March 1847 at the Teatro della Pergola in Florence.

According to the organisers, in Macbeth, Verdi surpasses the conventional frames of his time and composes an operatic work of theatrical power and characters that possess extraordinary psychological depth and intensity, whereas with dexterous orchestration he succeeds in dramatically sketching violence, conspiracy and death.

Ticket prices range from €25 to €70 and there is simultaneous translation in Greek, English and Russian with subtitles.