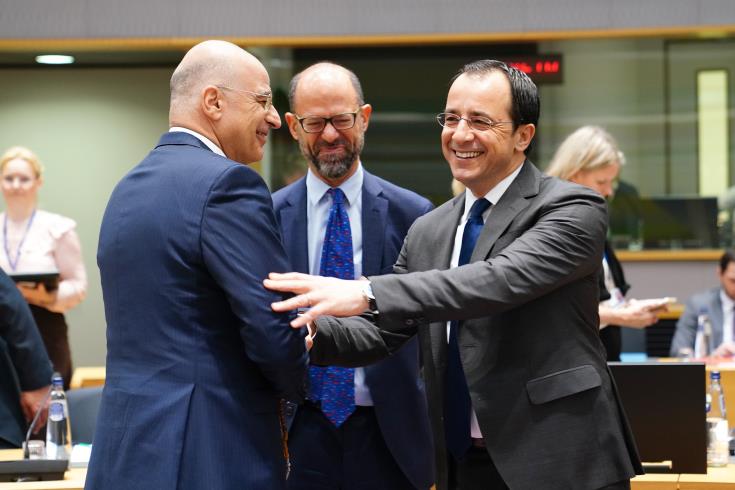 Moreover, asked about the course of the efforts to solve the Cyprus problem, that have been frozen as a result of the pandemic, Christodoulides stressed that the Greek Cypriot side is willing and is ready to continue the efforts as soon as the conditions allow it. “There is no other choice,” he noted, while at the same time he said that “among other things the escalation of the illegal activities of Turkey in Cyprus’ EEZ, particularly amid a universal pandemic and its multilevel repercussions, including the field of Energy, causes concern.”

Asked how diplomacy generally, and more specifically as regards Cyprus, will be affected by the pandemic, Christodoulides noted that he considers that diplomacy in general will be affected to an important level both as regards procedural issues, as for with regard to the need for natural presence in bilateral or multilateral meetings, as well as regards issues of substance related to the international system, which is the framework in which diplomacy is called to function.

Christodoulides said that “particularly for small states, like Cyprus, I consider that these changes will be more noticeable. To be more precise, for example, as regards procedural issues, meetings, particularly multilateral ones, taking place via teleconferences, cannot be as effective as meetings with natural presence. At the same time, the international framework in which we are functioning experiences significant structural changes and reinforces tendencies that question well established principles and values of the international system as were formed, particularly after the end of the Cold War that was a milestone as regards the international situation ever since,” he added.

He went on to say that the pandemic and its economic and many other repercussions follow the world economic crisis that started in 2008 and the recent immigration crisis. “These two crises led some states gradually to intensively question structures, principles and values of the international system as were formed after the Cold War. They led many countries to isolation, to becoming introverted and to question multilateralism and the role and importance of inter-governmental organizations. I deem that after the end of the current pandemic, this kind of tendencies and approaches will be even further reinforced. I consider that the priorities set out through the foreign policy of states will be revised and readjusted,” he added.

Invited to say if the Foreign Ministry has drafted a plan about the current period and the era after the coronavirus pandemic as to how it will promote its policies, Minister Christodoulides said that in the framework he referred to, they have begun to make a plan and an assessment as regards procedural issues but most of all about issues of substance, “with a view to be in a position to respond to the new situation as is being formed.”

He went to say that as regards the matters of substance apart from the other things they are doing at the Ministry they have also held discussions with a number of academics requesting them to submit their own approaches, evaluations and suggestions in writing.

Asked about that impact of the current situation on the bilateral, trilateral and multilateral relations of Cyprus with other states and organizations, Christodoulides said that all states had to manage an unprecedented situation.

“I recall what the French President has so aptly noted: We are at war. There is no doubt that in many issues affected by the management of the pandemic, some states, unfortunately, chose to walk alone. Even at the EU level. This is a test of strength for the EU, all states and the whole international community, a transitional period that could bring significant changes,” he added.

He also noted that “as regards our ‘family’, the EU, there is another dimension the repercussions of which I deem we will experience in the Union in the near future.”

The Foreign Minister said that all these days he has had discussions with his EU counterparts and with his counterparts of neighbouring states.

He noted that the Foreign Minister of a neighbouring state asked him to mediate to EU members states that did not allow the export to his country of medical supplies that were bought, paid and ready for dispatch at the airport. He also said that during their discussion the particular Foreign Minister referred to the example of a third country that does not follow such policies, but on the contrary provides assistance at no charge.

Christodoulides also said that many states are currently evaluating the facts concerning the coronavirus pandemic and its impact, at the international level, and this will probably lead to redefining policies and approaches. Furthermore, he said that one cannot ignore that a neighbouring state of Cyprus that domestically faces particular difficulties in addressing the pandemic, has chosen to improve its image at the international level by sending sanitary material to third countries.

Asked when he considers that there could be a revival of the efforts aiming to solve the problem of Cyprus, that have been suspended, as a result of the pandemic, while Turkey continues its provocative activities in Cyprus’ EEZ, the Foreign Minister noted that “if we take into consideration that our goal and plan was the resumption of the talks from where they were suspended in Crans Montana, just after the electoral process in the occupied areas that was scheduled for April, undoubtedly the pandemic has had a negative effect since the electoral process in the occupied areas has been suspended.”

He noted that at the same time, among other things, the escalation of the illegal activities of Turkey in Cyprus’ EEZ, amid an international pandemic and its multilevel repercussions, including the field of energy, causes concern.

He noted that “we are willing and ready to continue the efforts as soon as the conditions allow it. There is no other choice. I wish and hope that very soon we will pass to the post-coronavirus era and we will be able to continue the negotiations for the reunification as well as all other plans for progress and welfare in our country.”

Cyprus has been divided since 1974 when Turkish troops invaded and occupied 37% of its territory.  Repeated rounds of UN-led peace talks have so far failed to yield results. The latest round of negotiations, in July 2017 at the Swiss resort of Crans-Montana ended inconclusively.