OSCE ready to provide assistance to efforts for a Cyprus settlement 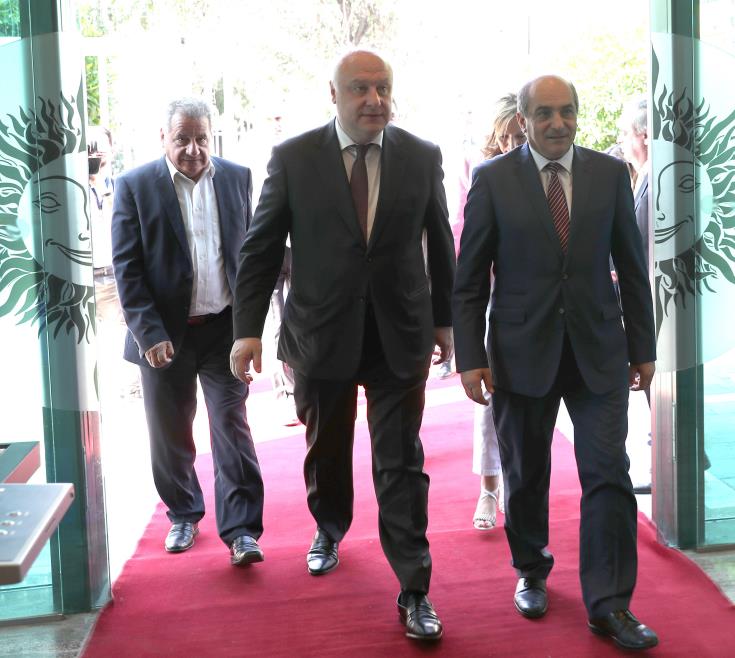 The Organization for Security and Co-operation in Europe (OSCE) is ready to provide assistance to efforts for a Cyprus settlement, OSCE Parliamentary Assembly President George Tsereteli said on Tuesday.

Tsereteli who is paying an official visit to Cyprus, at the invitation of House President Demetris Syllouris, said after a meeting he had with Syllouris and the members of the Cypriot delegation to the OSCE PA that “OSCE is playing an important role in the settlement of conflicts in many areas”. He went on to say that “we are not directly involved in a Cyprus dispute settlement but as I told the Speaker as an organization with very important acquis and expertise in conflict mediation and resolutions we are ready to accommodate, to assist with all the means that we have.”

Tsereteli noted that Cyprus is a very active member of the OSCE PA and that the members of the Cypriot delegation contribute very well and very actively in  the activities of the Assembly, as in defending human rights or in election observations, or by having an input and holding activities in peace and confidence building in different areas, thanking for these activities.

He noted that during the meeting they referred many times to world cooperation and peace which are very important values for Cyprus and for Europe. There are a number of problems and challenges that we see in this country, in this region and may be extended in the Mediterranean, the OSCE region, as migration flows, terrorist threats, climate change, human rights, he added.

He went on to say that there is a big package of different problems and challenges that need to be confronted through the right policies, that should be based on cooperation and collaboration in good faith.

“What we’ve heard here is very important, we heard many good initiatives of the parliament, many important initiatives of the Speaker himself and his team, how to respond to the needs of people, how to be more engaged with the society and to take into consideration their ideas, their thoughts, their proposals, would it be in terms of tackling corruption,” he added.

He noted that “there are very interesting initiatives also from the delegation,” noting that Cypriot MP Irene Charalambides proposed “a very interesting and important resolution” which will be discussed during their coming session. Moreover he thanked Cypriot MP Kyriakos Hadjiyiannis “who is very active, one of the leaders in our Committee for Human Rights and Democratic Institutions and his voice is always joining other important voices when we see human rights violations or other troubles around OSCE region,” noting that he has been several times in Ukraine, in the framework of the OSCE monitoring process there.

Tsereteli expressed the belief that his visit will serve for the deepening of cooperation between Cyprus and OSCE PA.

“We will continue our work on bilateral basis as Organisation and country and also in  Mediterranean affairs as far as we have a Mediterranean forum. I also appreciate all the peaceful initiatives and initiatives for cooperation from the Speaker in the Middle East, in the Mediterranean area and I’d like to wish all the success to Cyprus and the people of Cyprus,” he concluded.

On his part, Syllouris said that it is a great honour for him and for Cyprus that OSCE PA President is visiting Cyprus and its parliament. He noted they had a constructive discussion which covered issues related to problem due to the lack of peace and cooperation worldwide.

He noted that they discussed issues regarding corruption, in which Cyprus has been a pioneer in the framework of the OSCE, with Tsereteli`s help and through the activities of the members of the Cypriot delegation and with his own cooperation.

Moreover, Syllouris said that they discussed about continuous cooperation between Cyprus and the OSCE PA, particularly on Middle East and Mediterranean issues, in which the Cyprus House has developed certain activities, through trilateral cooperation schemes, and efforts for further and more practical cooperation with the countries of the Gulf and the Eastern Mediterranean.”