No one excluded from regional cooperation, Cypriot FM tells AIPAC 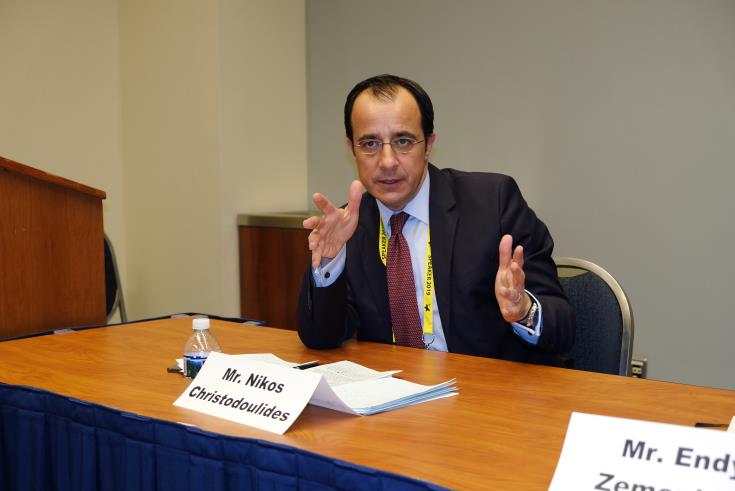 The establishment of a regional organisation for security and cooperation in the Middle East is the further step that needs to be taken in the Eastern Mediterranean, Minister of Foreign Affairs Nikos Christodoulides said, during a panel discussion at the AIPAC (American Israeli Political Action Committee) Policy Conference in Washington, on Monday.

The other two panellists were the Executive Editor of Athens daily “Kathimerini” Alexis Papahelas and the Executive Director of the Hellenic American Leadership Council (HALC) Endy Zemenides, who was interviewing them.

Before his remarks, Christodoulides condemned “in the strongest possible terms” Sunday’s attack against Israel.

He said that the main pillar of Cyprus’ foreign policy is to enhance its relationship with the neighbouring countries, namely the Middle East and the Gulf States.

“We are working at two levels. First at bilateral level with all neighbouring countries; second at a trilateral level, with the trilateral mechanisms we have started with Greece, because we believe that if we work together we can better manage the common challenges of the region and be more effective,” he said.

He added that from energy, which was initially the main issue at the trilaterals, now they are also discussing energy, security, defence, research and development, health and all issues of concern to the countries in the region.

“We are very glad that the international community is recognizing this added value of the trilateral mechanism and in this regard we had the participation of Secretary Pompeo at the meeting in Jerusalem that is sending a clear message of the political support of the United States to this regional cooperation,” he said.

He also expressed satisfaction that France is also interested in participating in the cooperation with Egypt, while Italy is already in the discussion with Cyprus, Greece and Israel on the issue of energy.

“We believe we have to take a further step, to institutionalize our partnership and establish a regional cooperation for security and cooperation in the Eastern Mediterranean. It is actually the only region in the world that doesn’t have regional organization,” he noted.

Christodoulides informed the audience of the decision of the Cyprus government to establish a permanent Secretariat for the trilateral mechanisms.

“We asked our partners in the region to appoint a diplomat in this Permanent Secretariat, in order to start working together with all countries in the region. Our long-term vision is to develop this Secretariat to an Organization of Regional Cooperation,” he said.

The Foreign Minister stressed that “we are always working on a positive agenda and we came together not against a third country, but because we believe through our cooperation we can better manage the great challenges of the Eastern Mediterranean. We are pillars of stability, we are predictable countries.”.

Christodoulides welcomed the Egyptian initiative to start a Gas Forum, describing it as an example of what we can do if we work together in all areas, not just energy.

He said the potential of Eastern Mediterranean to be developed as an alternative energy route to Europe is very important.

“That is why we want all countries in the region to work together and what we want to create is an ‘EastMed Corridor’,” Christodoulides said, expressing satisfaction because what Cyprus was saying five years ago that Energy can play for the region the same role played by steel and coal in post war Europe has been proven right.

“Now in our discussions, all neighbouring countries see the importance of institutionalizing our cooperation to a regional organization for security and cooperation”, he said.

The Cypriot Foreign Minister stressed that no one is excluded from this regional cooperation.

“We don’t exclude anyone, even Turkey. We are open to everybody. Unfortunately, we cannot change geography; Turkey will always be there as a neighbour of Cyprus, Greece and Israel. Turkey with its behaviour excluded itself from our discussions. If Turkey wants to join these discussions, it is up to Turkey; to have good neighbouring relations and to respect the sovereign rights of the countries in the region,” Christodoulides added.

Asked what more the United States could do to encourage this process, Christodoulides said that from the beginning the Cypriot government tried to change US perception towards Cyprus.

“The US administration was approaching Cyprus through the prism of US-Turkey relationship or through the developments in the Cyprus issue. We tried to change this perception and we are very glad that gradually there is a change in Washington. Last November we had the first ever statement of intent with US government, on security issues, something we consider very important in our bilateral relationship”, he said.

Christodoulides also pointed out that it is important that Cyprus is recognized as a security provider and a pillar of stability in the region and not as security consumer and he welcomed the presence of Secretary Pompeo at the Jerusalem meeting.

Speaking about what he sees as the next step, he said that something that was discussed last week in Jerusalem was for the Foreign Ministries of the countries to identify other areas of cooperation besides energy. He also said that at last weeks meeting the issues discussed were energy and maritime security in the Eastern Mediterranean.

“Now we are working to identify more areas, in order for the 3+1 cooperation to be enhanced in areas other than Energy. We want the clear political support of the US government and a clear endorsement of this trilateral cooperation. We really believe that this is also for the benefit of the United States and the EU, and we are glad that we see an increased interest of the US administration for the developments in the region,” he said.

Speaking about the Greek-Israeli relationship, the Executive Editor of “Kathierini” Alexis Papahelas said it has seen a tremendous change.

“A lot of taboos we had in Greece about been just a pro-Arab country without any kind of deeper relationship with Israel is gone. For me, the stunning thing about it is that we had a leftist government that has supported this kind of policy despite its previous positions. In my opinion, in Greece there is a mature consensus about this; no matter who is going to be in government, this relationship is going to be as deep and as broad it is now, with a conservative or any other government. The same goes with the US-Greece relationship,” Papahelas said.

Papahelas said the Greek-Israeli relationship has grown in ways no one was really expected, mentioning the regular military-to military meetings, the use of Greek airspace for Israeli Air Force manoeuvres etc.

He acknowledged that there were still a few speaking about the risks that are taken by Greece (i.e. to become a “target”) but he said in these thing you count both the gains and the cost.

Regarding the US role he stressed the importance of having clear signals coming out from the US administration, regarding the policy in the region. He presented the messages sent by the United States to Turkey before ExxonMobil’s drilling as an example of such clear messages.

The executive director of HALC Endy Zemenides pointed out that Cyprus was the first EU member state to successfully prosecute a Hezbollah operative and along with Greece and Bulgaria led the charge in the EU to designate its military branch a terrorist organization.

He also announced that this week, Senator Bob Menendez and Congressman Ted Deutch will introduce “a very aggressive piece of legislation on the Eastern Mediterranean that is very pro-Israel, pro-Greece and pro-Cyprus.”