No danger of fire from tyres in Vasiliko area, Minister says 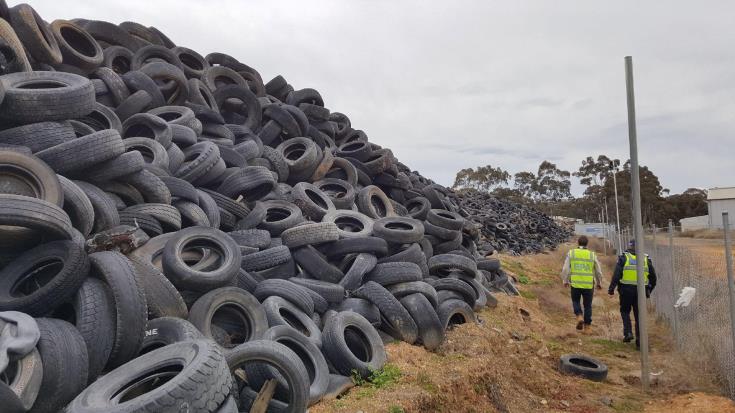 There is no danger of a fire breaking out from the large quantities of tyres in the Vasiliko area, Agriculture Minister Costas Kadis said on Friday, adding that tyre management will begin on August 6.

In statements, after meeting the management of the Vasiliko cement factory Kadis said that “a briefing took place on the organisation’s activities,” adding that the state cooperates with the factory in various ways and in particular on the management of waste.

“It is a huge industry and through its operations various waste can be managed in a way, which will be environmentally friendly and will contribute, precisely, to a rational management and processing of all these materials,” he pointed out.

Kadis added that during the meeting, specific issues which concern the ministry were discussed such as the matter of managing the used tyres which have piled up in a particular area in Larnaca district.

“All procedures have been timetabled and we are monitoring on a daily basis the preparations underway so that tyres can be transported and their management may start taking place on August 6,” he said.

Asked to comment on concerns expressed in Parliament recently of a new deadly blast, such the one which took place in July 2011 at the naval base “Evangelos Florakis” from which 13 people perished, he said that “there is no such possibility, no such danger.”

“The area where the tyres are located is guarded on a daily basis,” he said, reiterating that “the matters which had to be and have now been resolved were procedural.”

Kadis continued noting that specific steps are underway from the relevant departments and that the procedure is monitored on a daily basis.

He added that he monitors and receives “reports on a daily basis on how we are progressing” and that he the tyres are expected to be transported and for their management process to begin on August 6.

He said that the ministry is not concerned adding that a set of steps are underway and the matter “is expected to be managed in the best possible way.”

At the same time Kadis clarified that the quantities of tyres in the Vasiliko area today are not that large so as create a fire hazard as has been implied in recent days.

“The outcome of our visit is that there is no such danger or possibility” within the factory grounds, he said.

During their meeting they also discussed cooperation on other waste in Pentakomo, he said, adding that soon tests will take place to check whether a product produced by that unit can be used as an alternative fuel within the factory. If tests show that the material can be used then it will be systematically used by the cement factory, he pointed out.

Replying to a question on the material he said it is “usually used in heavy industries as an alternative fuel,” noting that there is no other way to use this type of material.

On his part, Executive Chairman of the Vasiliko cement factory Antonis Antoniou thanked the minister for his visit and said the meeting had been “very constructive.”

Replying to a question he said that the factory already manages tyres on a daily basis. “What we are talking about today is to transport large quantities amassed from various areas in Cyprus which should be transported immediately to our facilities,” he noted.

He added that “we have discussed the whole timetable and we will slowly begin in August to bring tyres increasing the quantities.” The whole management is done in a scientific way, perfectly safely and processing takes place without a danger been posed to the environment, Antoniou said.

After the meeting Kadis and ministry officials who were accompanying him were given a guided tour of the area where the tyres will be placed, which is over 7 km away from any residential area.