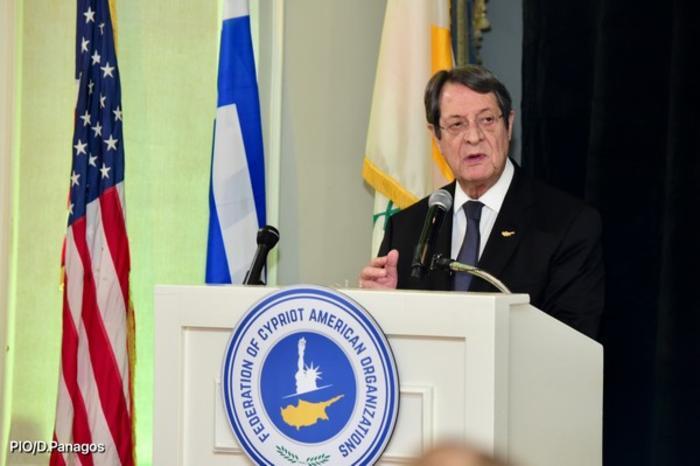 No blackmails, threats or pressure can be accepted on the Cyprus issue, President Nicos Anastasiades told his audience at a Friday dinner hosted by the diaspora in New York city.

He reassured the diaspora federations on his will and determination to solve the Cyprus problem based on principles that will lead to a functional and viable solution that will safeguard the independence of the island.

The President praised the role of the diaspora in the US, saying that most Cypriots are there as a result of the 1974 Turkish invasion and made the US their second homeland.

In his speech the President spoke of the negative developments in the Cyprus issue as a result of the Turkish stance and expansionist behavior that is not limited to Cyprus.

He said also that Turkey’s stance is far from the agreed solution framework as set out by the UN.

The President also referred to his speech before the UN General Assembly during which he tried to brief the international community about the Cyprus problem and the crimes committed by Turkey.

The President reassured the diaspora that he will protect the divided island in every way, not ignoring the rights and concerns of the Turkish Cypriots.