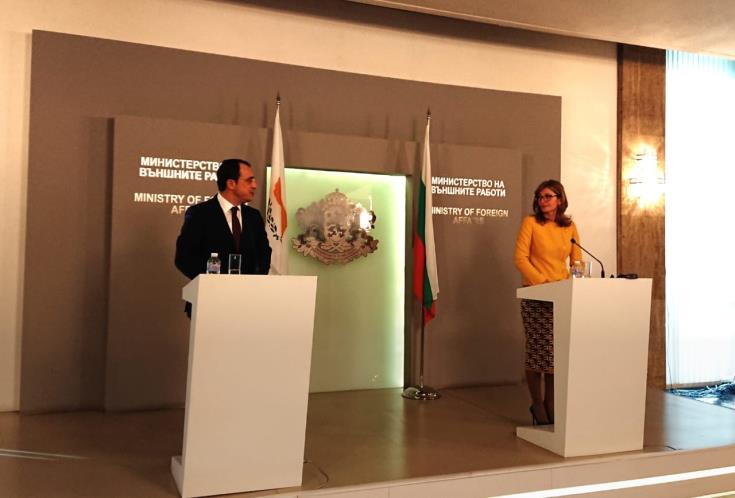 Turkey’s illegal activities in the Eastern Mediterranean are detrimental to the UN Secretary General’s efforts for the resumption of Cyprus talks, Foreign Minister Nicos Christodoulides said during a visit to Sofia on Friday.

He also noted that Nicosia counts on Bulgaria’s support to implement EU decisions and finalize the listing of persons and entities involved in these illegal activities. President Nicosia Anastasiades is expected to pay an official visit to Bulgaria at the end of next month.

Speaking to the press following his meeting with Deputy Prime Minister for Judicial Reform and Minister of Foreign Affairs of Bulgaria, Ekaterina Zaharieva in Sofia, Christodoulides said that he briefed his counterpart on the latest developments with regard to Turkey’s escalating provocations in the Eastern Mediterranean, with particular reference to the latest illegal drilling that is being carried out by Ankara, in Cyprus’ Exclusive Economic Zone.

“As we all agreed in Brussels on Monday at the Foreign Affairs Council, we must expedite and finalize the work on the listing of persons and entities involved in these illegal activities as per our relevant Council Conclusions. I very much count on the support of Bulgaria in the implementation of our collective decisions” Christodoulides said.

“Unfortunately, Turkey’s illegal activities are detrimental to the efforts of the UN Secretary General to create an environment that is conducive to the resumption of negotiations for a settlement to the Cyprus problem that will reunify the island on the basis of a bi-zonal bi-communal federation, in line with relevant Security Council resolutions and the principles upon which the EU is founded,” he added.

Cyprus’ Foreign Minister also said that during his meeting with his Bulgarian counterpart and the constructive consultations with the delegations of the two sides, they also reviewed the entire spectrum of bilateral cooperation, and discussed concrete ways to further expand their ties, both at a bilateral level, as well as within the framework of the EU.

“We have identified a number of fields, including trade, energy, investment, education, tourism and culture, as areas of special potential for further development,” Christodoulides said.

He also noted that the establishment of an institutional bilateral consultations mechanism between the two Foreign Ministries, would serve as a platform for taking discussions forward, with a view to achieving tangible results. “I am convinced that the official visit by President Anastasiades to Bulgaria, scheduled to take place at the end of next month, will build on the excellent foundations we have laid today and add to the already strong momentum of our efforts,” Christodoulides said.

At the same time, it is equally important for our partners in the Western Balkans to remain committed and focused on driving forward their reform agendas, he noted.

Christodoulides told finally Zaharieva that he looks forward to reciprocate, by welcoming her in Nicosia at the earliest opportunity.

By In Cyprus
Previous article
Russia dismisses rumours on recognition of breakaway north
Next article
3.2 billion nights spent in tourist accommodation in EU in 2019, 18 million in Cyprus