Next EU leadership the focus of MED7 Summit, leaders to be briefed on Turkey’s actions in EEZ 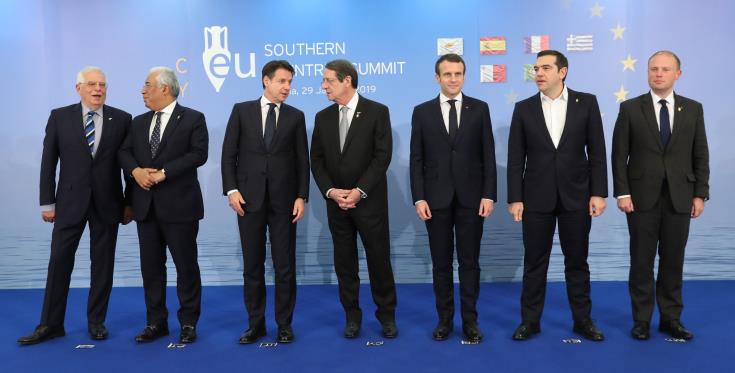 The consultations on the appointments for the next EU institutional leadership, will be the focus of the 6th Mediterranean EU Member States Summit (MED7), which will take place in Malta, on Friday, Government Spokesman Prodromos Prodromou has said, adding that President Nicos Anastasiades will also have the opportunity to brief his counterparts over Turkey’s illegal actions with Cyprus’ Exclusive Economic Zone.

In a written statement, issued here today, Prodromou says that President Anastasiades travels to Valetta, Malta, tomorrow in order to take part in the MED7 Summit.

The summit, he notes, aims to “reach convergences and to determine common positions of the southern countries in matters which have to do with the EU’s course, modern challenges and Europe’s future in general.”

At this point in time, the Spokesman says, the Summit’s interest is focused on the consultations and the search for establishing EU institutions leadership, after the recent European Parliament elections.

Cyprus President Nicos Anastasiades “will however have the opportunity to brief his counterparts and to raise the matter of Turkey’s provocations and its illegal actions and encroachment of the Republic of Cyprus’ EEZ,” he adds.

The government spokesman continues noting that at the general part of the Summit’s plenary a review of the elections results will take place as well as a discussion on the choices for the highest posts in the EU.

MED7 leaders will also discuss the Union’s priorities in the context of shaping the EU’s Strategic Agenda 2019 – 2024, with an emphasis on matters which are of particular interest for the Mediterranean such as the migration issue and future economic growth combined with digital prospects.

A Common Declaration will be adopted once the plenary is completed; he says.

President Anastasiades, Prodromou continues, will also have the opportunity to hold bilateral contacts in the context of the Summit.

During the Summit, all seven leaders will have a working dinner, during which they will discuss regional matters which concern the Mediterranean as well as security and stability matters, he notes.

The states participating in the Summit are France, Spain, Portugal, Malta, Italy, Greece and Cyprus.

By In Cyprus
Previous articleU.S. blames Iran for tanker attacks in Gulf of Oman, Iran rejects assertion
Next articleSpeaker says House will support UNECE’s proposal for Cyprus to host 2021 summit