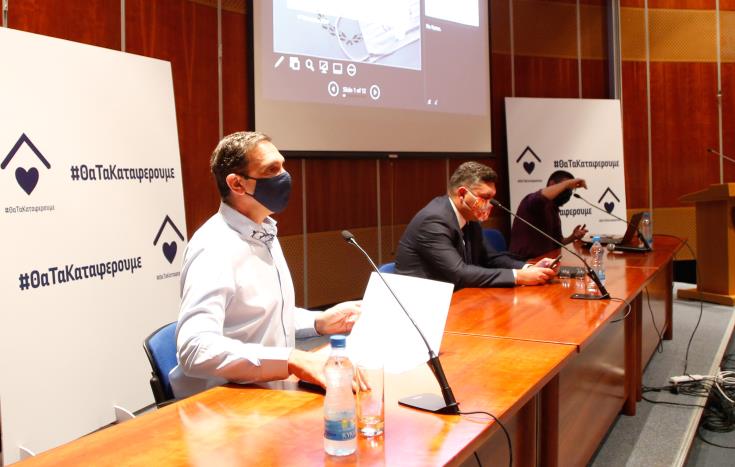 Minister of Health Constantinos Ioannou said on Thursday that the goal to reach a vaccination coverage – with at least one dose – of 60% of the population by the end of June, is feasible.

Announcing on Thursday the decisions for the restart of the economy and social activities,  Ioannou said that the implementation of protection measures and vaccinations are the way to overcome the difficult conditions of the pandemic.

Referring to the conditions that will apply from May 10 in  areas like shopping malls, restaurants, churches, etc., he said that in order to enter those places,  citizens should be vaccinated with at least one dose and 3 weeks have passed, or have been ill with COVID-19 for the last 6 months or, as a temporary solution until vaccination coverage is further advanced, citizens aged 12 and over are given the option to submit negative test certificate, PCR or rapid test, valid for 72 hours.

The Minister stressed that this measure is temporary and will be implemented for a transitional period, in order to ensure that travel and social contacts are made as safe as possible for the benefit of our health and for the Public Health. He said more specific information would be provided later in the day.

He clarified that the control for the possession of evidence will be carried out by the police or officers of the Ministries and Departments depending on the businesses in their areas of their responsibility.

The Minister pointed out that the epidemiological picture is improving adding that with more than 33% of the people vaccinated with the first dose so far, the cases of serious illness and hospitalizations, especially for the elderly, have been greatly reduced.

Ioannou said that the Ministry continues the implementation of the Vaccination Plan, having increased the possibility for more vaccinations per day. He noted that the citizens` response to vaccinations is encouraging and a positive sign that would lead to more relaxations of measures.

Referring to Wednesday`s decisions of the Council of Ministers, he said that the Cabinet decided the gradual restart of the economy and social activities in three phases, so that more time is given for the stabilisation of the epidemiological data and the acceleration of vaccinations with the administration of at least the first dose to 60% of the population until the end of June.

He explained that during the first  phase and until the 16th of May, the measures that were in force until the 25th of April will be restored with the same restrictions and health protocols, aiming at the smooth transition to the next phase from the 17th of May, when more businesses will reopen and more relaxations will be allowed such as social activities.

The Minister said that from May 17 the  number of people in places of culture and places of religious worship will be increased, social events  such as weddings and baptisms will be allowed, while businesses that remained closed for months will  reopen, such as playgrounds, amusement parks, casinos, zoos, picnic areas.

He added that when the epidemiological picture is improved, then  from June 1 the government will proceed to further relaxations, which will be closer to the conditions we knew before the pandemic.

Concluding, Ioannou said that  it was decided to abolish the measure for sending a text message for movement purposes.