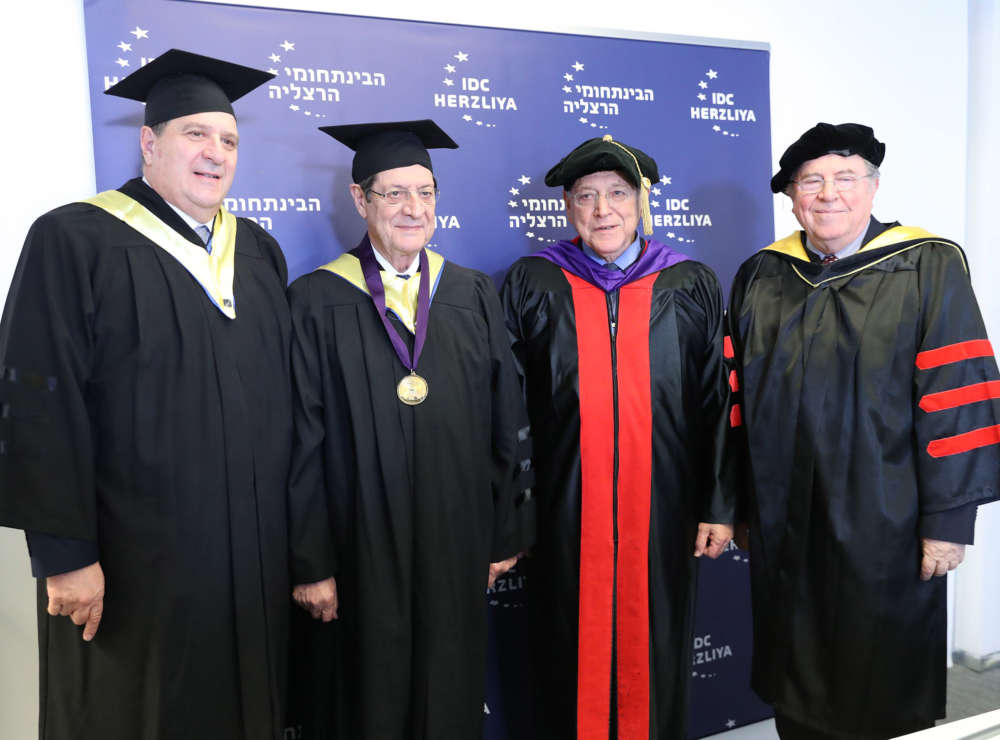 Cyprus and Israel have embarked on a new era of partnership, said the President of Cyprus, Nicos Anastasiades, receiving an Honorary Doctorate from IDC Herzliya University of Israel.

The President said that  he considered the honour awarded to him as an honour to the country and people that he represents and as the genuine recognition and appreciation of the long-standing struggles of Cypriot Hellenism for freedom and justice.

The President said that the quest of Cypriots and Jews for survival and self-determination was marked by the passage of more than 53,000 holocaust survivors from the British camps in Cyprus after the Second World War.

He added that during those extremely difficult times, the people of Cyprus, without any hesitation, embraced Jewish refugees from Europe during the shameful drama of the Holocaust.

“These events touch upon a key characteristic common to our two peoples: Resilience in the face of adversity, coupled with a unique bond of compassion rooted in the depth of history and our joint commitment for a stable and secure future for our countries, our peoples and our region. In this regard, I am extremely pleased to attest that Cyprus and Israel have embarked on a new era of partnership”, he said.

A new era, as he noted, “based on the common vision to substantially and strategically upgrade our relationship in all possible fields of co-operation, especially on energy, security, economy, tourism, research and innovation”.

“Through capitalizing on the solid foundation of our common values and our historic connections, we have nourished a diverse strategic partnership that has also blossomed into strong bonds between our peoples. It is a partnership that carries profound geopolitical meaning and I am certain that will only grow in the years ahead,” he added.

He furthermore referred to the trilateral platform with Greece, a Summit with the American Secretary of State, Mike Pompeo, in Jerusalem last March, the recent 7th Trilateral Summit in Athens, countless high-level meetings, but also an abundance of people- to-people contacts.

The President also noted that Cyprus had recently adopted the International Holocaust Remembrance Alliance (IHRA) definition on antisemitism and applied for observer membership in IHRA, as evidence of “our strong and active commitment in the battle against all forms of antisemitism”.

Speaking about the escalating tensions in the region, he said that establishing reliable synergies that generate stability and security was of critical importance, particularly in view of revisionist ambitions by some of neighbours and attempts to infringe sovereign rights of independent states, via outrageous, and utterly condemnable, actions which pose a serious threat to the fragile dynamics of our entire region.

He also referred to the EastMed pipeline, whose Intergovernmental Agreement was signed a few days ago, saying that it was “a project of paramount geostrategic value to energy diversification and proves our tangible commitment to anchor peace, security and stability, as well as last week’s adoption of the Eastern Mediterranean Gas Forum Charter in Cairo, agreed by Cyprus, Egypt, Israel, Jordan, Palestine and Italy, together with the endorsement of the Forum by the EU, the US and France as observers.”

“Regrettably, against this background of creating strong shared interests, Turkey continues to act as a “spoiler” by, amongst others, turning to military threats, illegal drilling activities within the Exclusive Economic Zone of the Republic of Cyprus, threats to occupy the fenced-city of Famagusta, and signing an illegal Memorandum of Understanding on the delimitation of maritime jurisdictions in the Mediterranean Sea with Libya”, he said.

These actions, he added, have been condemned in the strongest manner by the international community and the EU, since they do not comply with the notion of good neighbourly relations, international law and particularly the United Nations Convention on the Law of the Sea, and infringe upon the sovereign rights of third States.

“It is tough to digest that Cyprus, after almost 46 years since the violent Turkish invasion, still remains under illegal military occupation by an EU candidate country, a country which aspires to assume an important regional geopolitical role”, said Anastasiades.

A role, as he pointed out, “which is not consistent with the non-stop display of brinkmanship, bullying and gunboat tactics of coercion in Cyprus’ Excusive Economic Zone, the Aegean, in Syria, and now in Libya”.

These hostile actions, he said, apart from escalating tensions in our volatile neighbourhood, have also extremely negative consequences on the prospect of resuming talks on the Cyprus Problem.

However he said that he remained strongly committed in engaging in a new round of negotiations, once conditions permit it, with the aim to reach a lasting, viable and comprehensive settlement to the Cyprus issue, in line with the relevant UN Resolutions international and EU Law.